Frivolous litigation is alive, well, and as ludicrous as ever.

Warning: area near bottlenose dolphin exhibit may be…

Correct, most people would assume that the area around the performing bottlenose dolphin exhibit to be wet. Zoogoer Allecyn Edwards, however, is not one of these people. Edwards filed a $50,000 lawsuit against the Brookfield Zoo on Aug. 20 for a slip and fall she took near the tank in August of 2008.

More ridiculous than the filing of the lawsuit itself is the detailed claim of the suit. In the claim, Edwards says the zoo, “recklessly and willfully trained and encouraged the dolphins to throw water at the stands making the floor wet and slippery.”

If you are already scratching your head at this point I would urge you to stop, as her the claim gets even more inane.

Under certain circumstances, I think Edwards’ claim does “hold water.” 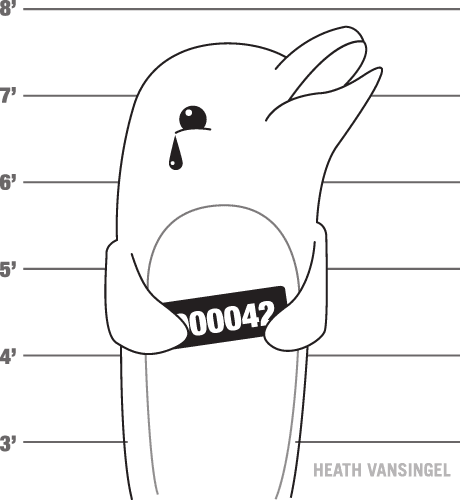 Edwards must have never before been to or even heard mention of an attraction like this in her past experiences. She also must have had no idea that in places like zoos or those akin to Sea World it is common for guests arrive early to shows of this nature to get the seats nearest to the tank for the specific purpose of having the animals splash water on them. Edwards must also be unfamiliar with the nature of water and how it has the tendency to reduce friction between two surfaces, which may then increase the risk of slipping.

Is personal liability for one’s own actions completely a thing of the past? Perhaps it is no longer the responsibility for individuals to assess assumed risks when going about their daily activities. It must be that the owner of one’s instantaneous whereabouts is accountable for that person’s well being.

Instances of frivolous litigation may make great water-cooler conversation, but they may also make huge dents in the checkbooks of the defendants involved.

It’s easy to be reminded of that McDonalds coffee lawsuit in 1994, when a woman named Stella Liebeck sued the company after spilling hot coffee on her lap.

The evidence presented during the trial convinced the jury that, despite already having a label present on the cup, the temperature of the coffee was unreasonably high and that McDonalds would have to cough up some “McDough” to cover Liebeck’s medical costs.

Liebeck suffered third degree burns over 6 percent of her body after the scalding 190° F “McCoffee” spilled onto her lap. The jury in the trial, after being presented with a booklet of over 700 previously filed complaints to the corporation about the temperature that the coffee, awarded Liebeck the initial amount of $2.86 million dollars. It is rumored that this amount was the approximate revenue McDonalds receives for two days worth of coffee. Ultimately, this amount was lowered by a judge to $640,000. In the end though, Liebeck ended up settling out of court with McDonalds for some undisclosed amount.

Unlike bringing suit against a multibillion-dollar corporation for coffee so hot that spilling it on one’s self incurs third degree burns and hospital treatment including skin grafts, Edwards is suing a zoo and the organization that manages it.

The Chicago Zoological Society (CZS), unlike some ominous corporate giant, dedicates its efforts to “inspire conservation leadership by connecting people with wildlife and nature,” according to their website.

The CZS is well known for supporting conservation efforts and research around the globe. The organization also funds and organizes The Center for Conservation Leaders. The center organizes outreach programs that do everything ranging from scientific discovery programs for toddlers, volunteer internships for college and high school students, to professional development programs for environmentally minded researchers and educators.
Edwards is filing the $50,000 suit in Illois’ Circuit Court in Cook County for lost wages, medical expenses and the “emotional trauma” she suffered at the tyrannical fins of the bottlenose dolphins and due to the zoo’s alleged negligence.

I am not against holding corporations accountable when they are negligent but with certain activities there is assumed some personal risk. Individuals are responsible for assessing this risk and acting as they feel would be best for their personal safety. Steps becoming wet and slippery is a predictable and reasonable result of a dolphin show at a zoo. I can only hope that if this goes to trial a jury awards this woman nothing but the suggestion to watch her step and get some common sense.