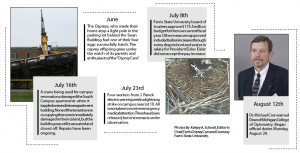 The Ospreys, who made their home atop a light pole in the parking lot behind the Swan Building had one of their four eggs successfully hatch. The osprey offspring grew under the watch of its parents and enthusiasts of the “Osprey Cam”.

Ferris State University board of trustees approve $175.5 million budget for the now current fiscal year. Other measures approved included tuition increases through every degree level and a raise in salary for President Eisler. Eisler did not accept the pay increase.

A crane being used for campus renovations damaged the South Campus apartments when it toppled over and into an apartment building. None of the tenants were occupying the room immediately damaged in the incident, but the building was still evacuated and closed off. Repairs have been ongoing.

Four workers from J. Ranck electric were injured in a lightning strike on campus near lot 10. All were taken to receive emergency medical attention. Three have been released, but one remains under observation.