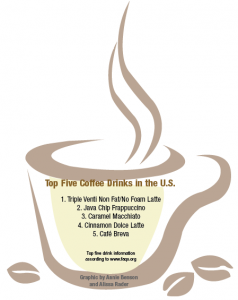 Statistics show that coffee is the most popular beverage in the world with over 400 million cups consumed every year, according to top100esspresso.com. Americans alone spend billions of dollars on coffee every year with the average person in the United States drinking three to four cups each day.

Ferris State students are definitely contributing to these statistics. There are ten cafes, coffee distributors, and shops in the Big Rapids area that cater to coffee drinkers. There would not be a need for all of these places if the students and people of Big Rapids were not craving caffeine.

In addition to having cafes to curve the craving, many Ferris students have coffee makers in their dorms and apartments. In addition, a coffee pot is a staple appliance in most homes and offices.

For many people, including students, coffee is what starts their day each morning. They need coffee to give them that instant boost of energy. Students will keep drinking coffee throughout the day and sometimes into the evening so they are able to pull an all-nighter for an exam the next day.

Senior in the marketing program Manpreet Singh enjoys grabbing a coffee drink from Starbucks at least once a week. He said, “I like it ‘cause it tastes so good, is in a convenient location, and keeps me awake.” His drink of choice is a grande Double Chocolaty Chip Frappuccino Blended Crème.

Singh said, “I wish the prices were cheaper. I’ve had to cut back because it was burning a hole in my wallet.”

Senior in the public administration program Jon Yonkers also enjoys coffee. His drink of choice at Starbucks is the Pike Place Roast. Jon says he has found a great way to get Starbucks coffee for a cheaper price by buying a thermos and getting it refilled.

“I drink coffee multiple times a day because I really enjoy the taste,” said Yonkers.

The coffee market is always coming up with something new. Starbucks is releasing a new packaged coffee that is supposed to taste exactly like what is made fresh in their shops. Another feature for the future is an application in the works for phones called myStarbucks. This application is supposed to allow you to order and pay for coffee with your phone. This app will also allow you to locate stores and store your favorite coffee combinations.

Coffee represents many things including stimulation for the day, sophistication, intellectual growth, conversation, and socialization. You never hear someone say, “Let’s go grab a Gatorade.” Coffee is a way to get acquainted and stay acquainted, to become awake and stay awake.

Coffee culture only continues to grow and has a strong future ahead of it. New coffee shops spring up every day and new flavors, blends, and at home products continue to fill the shelves of grocery stores and quench the thirst for caffeine of people all around the world.