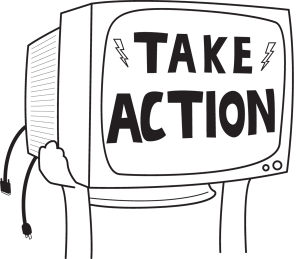 Students on campuses all across the United States have lost the zeal for frontline action of generations past by not using their power to affect change.

During the 60s and 70s a new culture of college students emerged as the baby boomers came of secondary education age. These students entered campuses across the nation and achieved progress through the use of protests, rallies and demonstrations. This group freely expressed themselves and their beliefs in an active format.

Those times were filled with issues that aroused great public concern such as the Vietnam War, nuclear arms, racial and sexual discrimination and the environment. Not only did college students voice their opinions on these heated issues, but they also took on American culture as well as moral traditions and norms including sexuality, drug use, alternative lifestyles and conformity.

College campuses used to be hot-spots for political activism. Students held demonstrations and protests to stand up for what they believed in.

Comparing the students of those times to our generation can be disappointing. The passion and concern for global and national issues that were evident in times past are not present in today’s college students. Now, students make a Facebook group, join a student club, or pass out fliers to promote their causes, quietly blending in.

These things do little to affect any kind of large-scale change. Passive tactics like this do not get attention and they do not call for recognition. The right to assemble, protest, and voice concerns and opinions is something that students should exercise more often.

Currently on Facebook there is a group called “Save the Michigan Promise.” I am a member of this group and every now and then I receive a message with updates on the situation or a message encouraging members of the group to write a letter to a Michigan representative telling them why the scholarship needs to go through. This is all well and good, but does it really have any impact?

In the past students held protests often and were not afraid to put their reputations or lives on the line for the sake of their beliefs.

On May 4, 1970, there was an anti-war rally organized on the campus of Kent State University of about 3,000 students. Four students were killed and nine were wounded by the Ohio National Guard during the protest. These students were not hurting anyone, they were just exercising their constitutional rights of freedom of assembly and speech. They were just sticking up for what they believed was right.

Comparing a social networking group to a rally that claimed the lives of students involved makes a person take a step back and question our generation’s level of commitment. Do our methods effectively advocate for the causes that we supposedly truly believe in?

There are current national and global issues that the baby boomer generation would have been protesting over every day. Things like the Iraq and Afghanistan Wars, global warming, homosexual rights, abortion and gun control would have been just a few hot topics, and undoubtedly the focal point of many heated demonstrations. Almost certainly, the threat to take away a scholarship, like the Michigan Promise Scholarship, would also have been a cause for action. 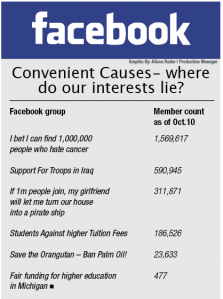 I doubt that a Facebook group would have sufficed for students in the 60s and 70s who were faced with these issues. The baby boomers would have swarmed the capital building and not left until they were forced out or until they saw progress.

Students should start demonstrating for what they believe in. Standing up for what one thinks is right should require “standing up.” This would show political entities that students will not tolerate injustices. Students should take issues, like the cutting of scholarship funding, very seriously. We should not just sit by and update the latest social networking groups we belong to on what we see happening in the news.

I’m not saying that students no longer take any interest in political issues. In fact I know many, myself included, who have strong political opinions. Even though there are students who care, I urge them to take a lesson from those of earlier generations and begin to voice these opinions.

Change for the better doesn’t happen online, it happens on the frontlines. Let’s make college campuses settings for positive change again by standing up, being active, and complaining like we mean it.