The future of the Michigan Promise is still unclear

Over 96,000 students are anxiously waiting to hear the fate of the Michigan Promise Scholarship and they’re going to have to wait a little longer.

Freshman Michael Lewis calls the decision to cut a program that students have become financially dependent on unjust and hypocritical. “I’ve personally never been more disappointed in my government.”

“This is yet another example of term-limit legislators acting in opposition of the people they are supposed to represent and contradicting promises made in the past,” said Lewis.

Prospects are beginning to look hopeful however, as Michigan lawmakers get closer to reaching a finalized budget for 2009-2010. Senate Majority Leader Mike Bishop (R-Rochester) is expected to send the six remaining budget bills to Governor Jennifer Granholm this week.

Gov. Granholm is expected to use a line-item veto on any cuts in the Michigan Promise Scholarship Program. She is also expected to veto portions of the bills in order to increase spending for revenue sharing, Medicaid, school aid, local fire and police and other programs she believes to be important to public health and safety.

Michigan currently has a $2.8 billion budget deficit, but lawmakers have looked to cut around $1.2 billion in state spending, including funding for the Promise scholarship.

Democratic lawmakers however are looking at new tax increases in order to restore funding to some of these programs, including the Promise.

The Democratic controlled House voted to suspend an inflationary increase in the personal exemption on Michigan’s income tax. This will save roughly $55 million but will result in taxpayers not being able to claim an extra $4.35 per person deduction on their income tax form. 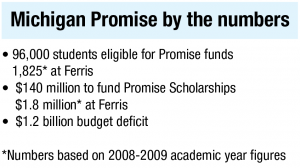 Evan Thompson, a freshman in the political science program said, “The last thing we need to do to Michigan citizens is increase taxes. I think both sides should be able to agree to that.”

It is his belief that the Michigan legislature never should have passed the bill funding the Promise scholarship if the state didn’t have the money to pay for it in the first place. “But they [lawmakers] passed it and it’s law,” said Thompson. “They can’t renege on it now.”

It is unclear as to when Michigan’s lawmakers will finalize the budget negotiations, but the temporary budget that they passed at the beginning of the month expires on Oct. 31.