A belch is a pretty sincere “I love you” 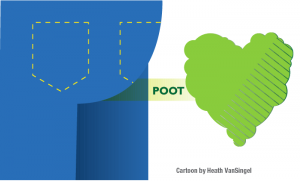 There are many ways to measure the progress of a relationship, but what about the first belch?

The first date, the first kiss and the first up-all-night conversation are all points in the relationship timeline that everyone plots in bold.

I propose that there exists an alternate system one can use to chart out their relationship progress – the “Bodily Function Indifference “ (BFI) model.

The BFI model is based off of the willingness to perform bodily functions in front of your significant other. The “ickiness” and “grossitude” of the BFI model is surpassed only by its accuracy.

Consider the period of time when two people are just starting to get to know each other. Everyone has been in this situation and knows it feels crucial to make just the right impression on the other person. Every little sneeze, cough, itch and gurgle are carefully monitored and forcibly suppressed.

As two people get more and more comfortable with one another and are willing to disclose that they are, in fact, human beings that do do these things, the occasional belch might get let loose or even the dreaded toot. There are a couple of factors that affect the BFI model though. 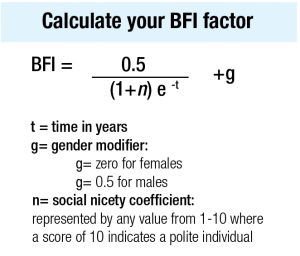 One of these is gender. It may be a stereotype but the likelihood to “cut loose” definitely increases if one happens to be a member of the male gender. There are exceptions to every rule though and everyone has that female friend who can belch like a haggard old sailor.

Another factor that affects the BFI is one’s general willingness to do these things at all, or what I call the social niceties effect. For example, some people will never be able to willingly “break wind” in front of another person no matter how comfortable they become. These people excuse themselves to the bathroom and pretend to wash their hands or something.

So, some couples get to the point where they will pee with the door open, while others never will because it is just not in the person’s nature.

Another consideration is how funny the bodily function is at the time of its emission. Burping at a fancy French restaurant is cause for embarrassment and social tension, but doing so while hanging out and watching a football game might warrant a high-five, laughter or even thunderous applause (depending on the caliber of the belch). Another classic example and common social phenomenon is “the stinky elevator.” I am pretty sure I don’t have to explain this one.

Thus, the next time you are wondering how your relationship is progressing refer back to the BFI model. How forgiving your significant other is of your flatulence is a clear-cut indicator of how much they care for you and how comfortable you are with one another. If you really love your boyfriend/girlfriend, let ‘er rip!