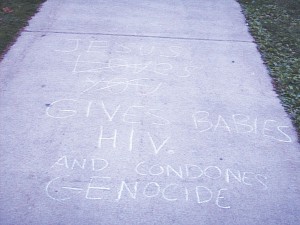 College campuses have long been a haven for diversity. They are places that reflect the diversity of our world and they are places where people can express their beliefs.

When I came across a statement on the sidewalk in the quad that said, “Jesus loves you!” I didn’t think anything of it because things are written in chalk all over campus.

A few days later, I was walking past that same statement, but something was definitely different. The message had been changed to say, “Jesus gives babies HIV and condones genocide.”

I was taken aback by the new message. As a Christian, I took huge offense to the defilement of the original version.

I do not feel that it is my place to judge others. Many people are brought up in a certain culture and are raised to believe in a particular religion. I understand this and believe that as long as someone is a good person that is all anyone should care about.

Acts like this are a perfect example of judging others and not being accepting that there are people in this world with different views than that of your own. No one was forcing anyone to look at that message, and if someone didn’t like the message, they could have just ignored it and kept walking.

People may be ignorant to the tenants and beliefs of religions that they are not themselves a part of. Ignorance, fear or anger do not grant a person license to belittle the beliefs of others simply because they feel threatened.

I understand how one might find it frustrating to have a religious message forced onto them. However, this was just a message promoting something that an organization on campus believes in. There was no reason to lash out and make such an inappropriate statement.

There are many different religious organizations on campus as well as people who hand out fliers about different types of religions. There are diversity offices on campus that work hard to promote tolerance, acceptance, and a diverse atmosphere on campus. Obviously there are some on campus who have not yet received this message.

As adults, college students should have the word “mature” attached to their sense of self. Being intolerant, rude, and hateful are not characteristics that convey maturity in my book. Everyone should be able to express themselves openly; no one should have to hide who they are and what they believe in from the world.

Aristotle said, “It is the mark of an educated mind to be able to entertain a thought without accepting it.” You don’t have to accept someone else’s religion, but you should accept that they have a right to believe as they choose.