The team enters the GLIAC Tournament as wildcard 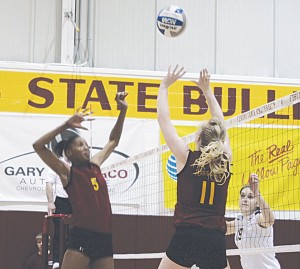 The Ferris State volleyball team split its final home matches of the season.

The Bulldogs began the weekend action on Friday, in which they dropped a close 3-2 decision to the Michigan Tech Huskies. Ferris split the first four sets with the Huskies, but was unable to close out the match, losing the final set 15-11.

For the Ferris defense, sophomore outside hitter Ashley Huntey paced the team with 12 digs and sophomore libero Lisa Tobiczyk chipped in with 11 digs.

The loss against Michigan Tech marked the fourth loss in five matches for the Bulldogs.

After dropping the first match of the weekend, the team bounced back and closed out the regular season with a 3-1 victory over Northern Michigan on Saturday. Goodson was confident the team would bounce back.

“We knew that we’d have to show our mental toughness after the first loss,” said Goodson. “We knew we had another big game going against Northern Michigan.”

The match started with a special ceremony to honor the four seniors on the team: Gilchrist, Katie Edwards, Amanda Kettlewell and Sarah Lark.

Ferris was able to jump out to an early lead in the contest, as the team won the first two sets 25-20 and 25-22. Northern Michigan took the third set 30-28, but Ferris closed out the Wildcats with a decisive 25-17 fourth set victory to win the last home match of the season. Ferris dominated the hitting percentage in the fourth set with a .276 mark, while the Wildcats had only a .077 hitting percentage.

The Bulldogs had three players with double-digit digs, with Tobiczyk tallying a match-leading 16 digs, junior libero Whitney Rupp adding 14 and Huntey putting in 12. Ferris held a 62-49 advantage in digs during the match.

The Bulldogs finished the regular season with a 19-10 overall record and a 10-6 record in the Great Lakes Intercollegiate Athletics Association (GLIAC).
Ferris now heads into the GLIAC Tournament, where the team is a wildcard following a fourth place tie with Northern Michigan in the GLIAC North Division standings. The team has a great deal of morale heading into the tournament.

“Our confidence level is really high going into the tournament,” said Goodson. “That final win solidified the confidence we have in each other and really showed the trust we have for one another.”

The Bulldogs will face off against the Hillsdale Chargers in the first round. Hillsdale is the number one seed in the tournament after winning the GLIAC South Division with a 12-4 conference record and a 20-7 overall record.

In their only match this season, the Bulldogs defeated the Chargers 3-1 at Hillsdale on Oct. 3. The opening round contest will take place today at Jesse Philips Arena in Hillsdale at 7 p.m.