Being broke is, in many respects, a key fixture in college culture.

Every student has that story about living off of jam for a week and most college graduates have developed a strong aversion to Ramen noodles by way of their college experience.

This Goodwill shopping, scrounging for cash mentality though, is something that I am seeing less and less. With the supposed “necessity” of cell phones, $300 mp3 players and clothes that have that pre-worn look for a new-sticker price I have to wonder how students are coming up with all this spare cash.

Answer: Many of them are charging it. 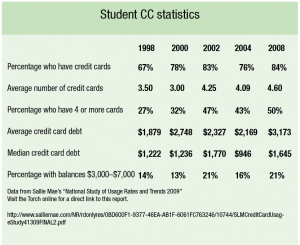 Credit card companies too have noticed this recent surrender of frugality and offer deals that are geared specifically to students. With bonuses like returns for good grades, money back on bookstore and fast food restaurant purchases and cash-in points for prizes like DVD’s and iPods, it is obvious how appealing these cards may be to some students. Numerous reports have shown that the average amount of credit card debt is steadily increasing among college students.

Credit card companies know how to keep students minds on these bonuses too. You can follow your creditor on Facebook if you happen to have a Chase Bank +1SM card or jam out with bonuses from MTVU if you have an MtvUTM card from CitiBank.

These companies are obviously predatory. It is shameful, though not surprising, that they would put in so much effort to lure in college students. We are obviously not the most money savvy bunch of individuals, and having magical money at our disposal is dangerous. Undoubtedly, credit card companies are more than aware of this.

Thankfully, the allure these cards offer students and credit companies’ persistence to loop in the 20-somethings has not gone unnoticed. Last May the credit CARD Act of 2009 was signed into effect. Along with protections for all creditors, according to thewhitehouse.gov, the act “contains new protections for college students and young adults, including a requirement that card issuers and universities disclose agreements with respect to the marketing or distribution of credit cards to students.”

Among other stipulations, credit card solicitors cannot advertise within 1000 feet of college campuses. Parts of the act are already in effect and it is set to be in full swing by August 2010.

There is a really easy way to avoid the whole problem all together. Do not get a credit card. Instead, live more frugally and purchase only within your means.

If a credit card is necessary for survival, be smart about the stipulations, rates, rules and “rewards” the card offers. Instead of looking for bonus returns on clothing purchases or points toward that DVD Box set of “Entourage” you have had your eye on, look for a card with a low annual percentage rate and a low default interest rate.

As students, we are already the targets of gratuitous amounts of marketing. In the case of credit card companies, it is dire that we not let the allure of this advertising get to us. We will end up paying for it. Maybe not now, but definitely later.