Releasing albums with a mix of old and new songs, performers look to change their style for the holidays 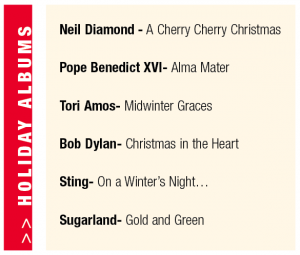 Maddox, a junior in the mechanical engineering program, performed the piece in high school and has loved it ever since. Some artists are looking to put their own mark on holiday favorites as they perform new versions of old songs and flood the market place.

Bob Dylan released a Christmas album titled, “Christmas in the Heart” and has pledged proceeds from the album to the Feed America charity.

Both the Jackson Five’s album, “Ultimate Christmas Collection” and Ray Charles’ “The Spirit of Christmas” have been reissued, remastered and made available in time for the season.

Even Pope Benedict XVI is releasing a series of recordings of songs and prayers backed by the Royal Philharmonic Orchestra and the Choir of the Philharmonic Academy of Rome.

Neil Diamond has recognized an avenue for his Christmas album, playing off one of his past top hits, his “A Cherry Cherry Christmas” is his third holiday album in recent years.

New albums or old ones don’t mean as much to senior in applied mathematics, Jack Mulvaney. For him, the winner for best holiday song has always been, “Rudolph the Red-nosed Reindeer.”