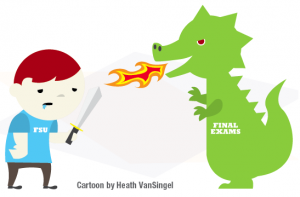 After a much needed scholastic interlude, it is easy to fall prey to a mean case of the “I don’t wanna’s.”

Being around family and friends, as well as having the luxury to spend your time however you like, can easily lure even the most serious student away from the books.

Although a break from classes is welcome for the most part, having the main fall break this late in the semester is detrimental to students as it can lure us into a false feeling of completion.

This is a major concern, especially since expectations for students seem to skyrocket drastically in the last thirty or so days of the semester.

Everyone knows how hectic the end of the term usually is. Students need to worry not only about finals, but also about the inevitable heap of tests, projects and reports that get crammed into those last couple of weeks.

Trying to recall the material from eight weeks ago is hard enough. Couple this with learning mass amounts of new material, that is usually more difficult, in a very short period of time and a veritable Mount Everest of academic woe has been created.

Consider too that for many classes events that occur within the last couple of weeks of the semester account for a disproportionally large percentage of one’s grade. Final projects and exams can commonly count for a fifth or more of one’s grade in a course.

Even if this scenario were not entirely unreasonable, it is made even more difficult by a semester’s worth of exhaustion and acquired apathy.

If readers are anything like myself they have found that the level of enthusiasm towards one’s studies has been slowly but steadily dwindling throughout the term. I can say that, for myself, it is hard to believe that the student who started the term, so bright-eyed and eager to get going with this school stuff, is the same one who is writing this article today, her hair commonly only mostly brushed and finding any excuse to watch something on Hulu.com.

This is not to say that professors have it easy. No normal human being can sit down and grade 200 plus exams, final projects, or papers in any short amount of time. And just like the students, these professors are probably exhausted as well as a little fed up with us.

Logically then, I would guess that a proposal for no final exams and projects for the sake of common happiness and wellbeing probably falls on deaf ears, even though these ears may be impaired only by obligation and not particularly by choice.

Whatever end of semester demons one may be facing, it is important to fight them face on, rather than falling into the all-too-easy trap of procrastination and apathy. Be strong, my fellow students! The reward of three or so weeks of solid leisure is quickly approaching. Until then, please ignore the girl in the corner of the third floor of the library surrounded by empty coffee cups and junk food wrappers.