“Thanks to everyone for participating,” said Liz Cottrell, student government event coordinator. “This will mean a lot to families in need.”

A total of 30 campus organizations, including every residence hall, participated in the food drive that began Nov. 9. All proceeds will be donated to Project Starburst and the greater Big Rapids area. 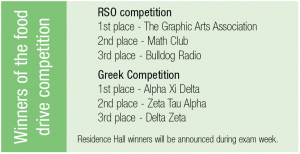 Final food totals had not been completely tabulated as of press time.