The Ferris State women’s basketball team won two of its three games returning to conference play over the weekend.

The Bulldogs defeated Lake Superior State at home on Thursday by the slimmest of margins.

Sophomore Kelsey DeNoyelles hit a pair of free throws with 35 seconds remaining to give the Bulldogs a 60-59 lead. Ferris survived two last-second chances to hang on for the victory.

The Bulldogs shot 51 percent from the floor, while holding the Lakers to just 31.6 percent shooting. Lake Superior made 13 of 17 free throws, while Ferris converted seven of its 11 attempts.

“Being tough on defense has been a huge focus of ours these past few weeks and it was nice to finally see all of our hard work pay off,” said Houdek. 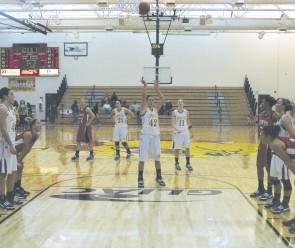 The nail-biter intensity carried over into the home contest against Saginaw Valley on Saturday as freshman forward Kylie Muntz hit a game-winning three-pointer at the buzzer to stun the Cardinals. Houdek said the team went crazy when that shot fell and that it was nice to see Muntz step up in the big time situation.

The Bulldogs trailed by 13 in the second half, but rallied with 24 points over the game’s final ten minutes.

Ferris made just one-third of its shot attempts from the floor, but converted 16 of its 18 free throw attempts in the game. The Cardinals outrebounded the Bulldogs by 14, but committed six more turnovers than Ferris.

Sophomore guard/forward Tricia Principe scored a game-high 21 points for the Bulldogs, making all ten of her attempted free throws. Junior forward Tiara Adams led the team with eight rebounds and added seven points as well. The team improved to 4-2 at home this season with the two victories.

Playing their third game in only five days, the Bulldogs travelled to Allendale, Mich. on Monday and lost 64-41 at the hands of rival Grand Valley State.

Grand Valley made 40 percent of its shots, while holding Ferris to just 33.3 percent. The Bulldogs made just 3 of their 17 three-point shot attempts in the game. Grand Valley spread the ball around effectively as six different players scored at least eight points.

“We got a lot of the shots that we wanted, but couldn’t get anything to fall,” said Houdek.
Principe led all scorers again with 13 points and also led the Bulldogs with eight rebounds. Adams and freshman forward/center Katy Fox added seven points each for the team.

Ferris is 4-9 overall and 3-5 in the conference this season following the weekend action. The Bulldogs travel to Ohio tomorrow to take on the Tiffin Dragons. The team will then play the Ashland Eagles on Saturday. Tiffin is 2-6 in the GLIAC, while Ashland currently holds a 3-5 conference record.