The Bulldog hockey team is ranked sixth in the nation following three victories during the holiday break.

The team took part in the 21st Annual Badger Hockey Showdown in Madison, Wisc. on Jan. 2-3.

Ferris started off the tournament with a 6-1 loss against then nationally No. 6-ranked Yale University, which snapped a 10-game winning streak for Ferris. Head coach Bob Daniels said the loss helped keep his team from becoming overconfident.

“When you’re winning like we have been, you can start thinking that you’re bulletproof,” said Daniels. “I thought the loss against Yale really helped show the guys that we can’t stop trying to get better.”

The Bulldogs bounced back with a 5-1 victory over Merrimack University and claimed a third place finish at the tournament.

Following tournament play, the Bulldogs returned to conference play this weekend with a series sweep over Notre Dame.

Ferris claimed a 5-2 victory in the series opener on Saturday.

The Bulldogs struck first as junior Scott Wietecha scored his first goal of the season on a five-on-three power play opportunity in the first period. 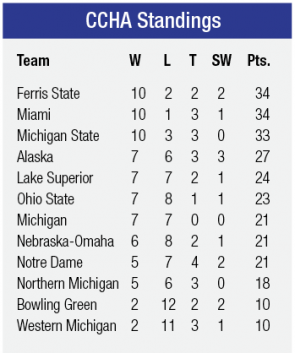 After strong goalie play from junior Pat Nagle in the first period kept the Fighting Irish off the board, Notre Dame quickly tied the contest just 49 seconds into the second period.

The score would not remain tied for long; Ferris quickly responded as senior Aaron Lewicki score with 14:23 left in the period. Junior defenseman Zach Redmond chipped in another goal just 1:15 later to give the team a 3-1 lead.

The Fighting Irish pulled within one at the end of two periods, but Ferris scored two third-period goals to close the door.

Ferris completed the series sweep with a 4-2 victory on Sunday.

Ferris got on the board first with a goal from junior Mike Embach 11:19 into the first period, but Notre Dame responded with back-to-back power play goals to take a 2-1 lead into the second period.

Ferris tied the game 6:53 into the second period as freshman Eric Alexander scored his third goal of the season.

Senior Blair Riley scored a rebound goal in front of the Fighting Irish net just 14 seconds into the period to give the Bulldogs a 3-2 lead. Senior captain Cody Chupp added a late insurance goal and it proved to be all the team needed, as Nagle stopped 11 shots in the period to clinch the series sweep.

Redmond had a goal and two assists over the two games and was named the CCHA’s Defenseman of the Week. Nagle improved his overall record to 7-2-1 on the season and has the highest save percentage in the conference at .938.

After the holiday break action, Ferris stands at 16-4-2 overall and 10-2-2-2 in conference play. The Bulldogs are in a first-place tied with Miami entering the crucial series this weekend.