Ferris picked up two conference victories on the road this weekend, giving the team a 4-1 record against Great Lakes Intercollegiate Athletic Conference (GLIAC) opponents during this recent five-game road trip. Ferris is now 10-7 overall and 8-4 in GLIAC play.

The Bulldogs recorded a thrilling 54-52 victory over the Wayne State Warriors on Jan. 21. The victory marked the first time since the 1994-1995 season that Ferris has won at Wayne State.

The Warriors jumped out to a 23-11 lead in the first half, but the Bulldogs battled back on defense by holding the Warriors scoreless the last 4:40 of the half. Ferris still trailed 30-23 at halftime. Both teams struggled shooting from the floor in the half, as each squad shot 28 percent from the field.

Ferris continued to hang tough in the second half as the team trimmed the lead to one point at the 7:09 mark. After staying close for the majority of the game, the Bulldogs finally tied the game with 2:17 left in the contest.

The game remained tied until the final 15 seconds, when junior guard Darien Gay buried a short jumper to clinch the victory. Gay, a Detroit native, had many friends and family in the stands.

“It felt great to hit the game-winning shot and to come through for my team in the clutch,” said Gay. “It was special since I got to hit the shot in front of a lot of friends and family in my hometown.”

Strong defensive play was the key down the stretch, as the team held Wayne State scoreless for the final 5:53 of the game. 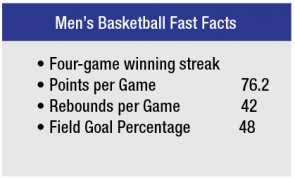 Pacing the Bulldogs was junior forward Justin Keenan, who put up 19 points and 12 rebounds, despite drawing double-teams for the majority of the night. Senior guard Josh Young chipped in 14 points for Ferris.

The Bulldogs wrapped up the five-game road trip with an 86-73 victory at Northwood on Saturday. The win against Northwood gave Ferris its eighth-straight season with at least 10 wins.

Ferris held a five-point lead at the half and never looked back, as the team outscored Northwood 47-39 in the second half.

Ferris held a 45-33 advantage in rebounds for the game. The bench play proved to be the biggest advantage, though, as the Bulldog reserves outscored the Timberwolves’ bench 29-11.

“We’re playing some good ball right now,” said Gay. “If we continue to play like this, the sky is the limit.”

Ferris will return home this weekend to begin a four-game home stand, starting with a matchup against Northern Michigan on Jan. 28.