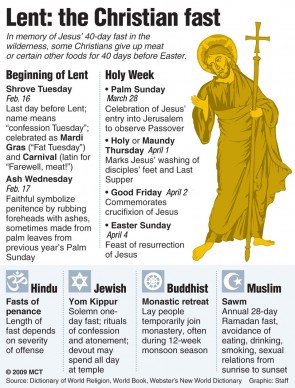 Raised in a Catholic household, I’ve spent nearly two decades giving something up for Lent.

Meant to remind Catholics of the 40 days of Jesus’ fast, Lenten ritual requires that something be given up, a sort of vice, to remind us of His suffering.

No meat on Fridays? I don’t know where that fits in exactly with the Bible and Jesus. I’ve heard rumors about the Pope and Italian fishermen, but regardless, I like seafood and grilled cheese, so it’s not a problem.

What I struggle with every year is what to give up for lent? Chocolate is one of the most popular along with ice cream and other sweet treats topping most people’s lists. Recent years have seen a rise in giving up Facebook for Lent and others choose to give up soda.

My mother would suggest to us as children that instead of trying to give something up, we should try to start doing something new that would make our lives and the lives of others better.

Under this ideology, one could endeavor to volunteer more or make a more concerted effort to exercise.

I think I like that better. My fellow Torch staffers might like that too. I could be a better listener or more organized. My professors would like it if I participated more in my courses.

The point is, giving something up that we enjoy, like junk food or Facebook, is fine, but come Easter Sunday we’ll be logging on with melted chocolate on our fingers. Trying to be better can help form positive, long-lasting habits – the way, I’m guessing, Jesus would have wanted it.