The Bulldogs remain tied for second with Michigan State in the Central Collegiate Hockey Association (CCHA) after splitting two games with the Spartans.

After a weekend series that saw both teams provide some offensive firepower, and with 10 combined goals scored during the two games, the Bulldogs and Spartans remain tied for second in the conference with 46 points each heading into the final weekend of the regular season.

Ferris won the first game of the home-and-home weekend series with a 4-1 offensive showcase. The victory marked the first home win against the Spartans since 2007.

The Bulldogs came out firing as they posted a 7-2 shot advantage in a scoreless first period.

Ferris took control of the contest in the second period as the team blasted three unanswered goals in less than 10 minutes, including a goal from senior right wing Aaron Lewicki for his tenth of the season.

Michigan State did not go quietly, though, as it cut the lead to 3-1 when Derek Grant snuck the puck past junior goaltender Pat Nagle during a power play opportunity early in the third period.

That was as close as the Spartans would get, as the Bulldogs got an insurance goal from junior center Justin Menke with 6:15 left in the contest on a power play opportunity to ice the victory.

Both teams were 1 of 5 on power play opportunities. The Bulldogs held Michigan State to eight shots on goal through the first 40 minutes of play.

Though Ferris took control on the offensive end, holding a 29-23 advantage in shots on goal, goaltending proved just as important as Nagle made 22 saves during the match. Bulldog head coach Bob Daniels was impressed with Nagle’s performance, especially in the third period. 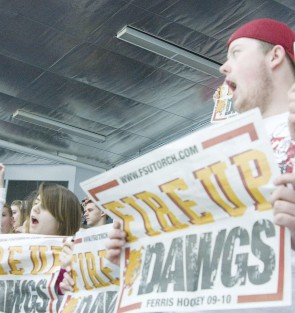 “I thought Nagle made some nice saves in the third to keep them from tying the game up,” said Daniels. “I thought we left him out to dry too much in the third period, but he handled it well.”

Michigan State claimed the second game of the series 3-2 as the scene shifted to East Lansing, where Ferris has not won since 2006.

In a back and forth opening period, the Spartans struck first with 15:09 left on a goal put in after the puck bounced off Nagle’s pads. The Bulldogs knotted the score up on a goal from Menke with 3:27 left in the opening frame. Ferris held a 14-5 advantage in shots on goal during the first period.

The second period proved to be much of the same as both teams posted goals in the period to keep the contest tied at 2-2.

With the score remaining deadlocked for much of the third period, the Spartans got the game-winning goal from Dustin Gazely with 7:29 left in the game.