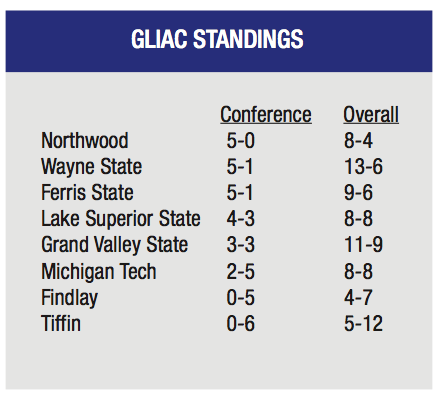 Ferris started the match with intensity, winning two of three matches in doubles play. The Bulldogs could not hold on during singles play, winning only one of six match-ups. Northwood’s triumphant singles play led to the 6-3 victory.

Bulldog head coach Alex Palladino said the team stayed composed throughout the match and said that they played well overall.

“I feel really positive about the doubles performance,” said Palladino. “I’m pretty enthusiastic about those matches because doubles hasn’t necessarily been our strength all season long.”

Sophomore Jack Swan captured the lone win in singles play for Ferris with a 6-3, 6-4 victory over Northwood’s Marcus Oliveira.

“Northwood looked a little sluggish during doubles play, and they woke up during singles play,” said Palladino. “Singles is a whole different game and they were able to pull out the singles spots to get the win.”

Northwood took over sole possession of first place in the Great Lakes Intercollegiate Athletic Conference standings with a 5-0 conference record and is the last unbeaten team in league play.

The loss against Northwood did not put Revall’s expectations for the season on hold as he believes the Bulldogs have what it takes to be second in the conference.

“Tennis isn’t like a lot of other sports in that it isn’t hard for us to bounce right back,” said Revall.

Ferris rebounded from the loss with a 5-4 victory over Wayne State on Sunday. The Warriors were 5-0 and one of only two unbeaten teams in the GLIAC entering the match. The Bulldogs won four of six singles matches and one of the three doubles matches to claim the victory.

Ferris is 9-6 overall and its 5-1 conference record puts it in a second-place tie with Wayne State in the GLIAC standings. FSU will play against Grand Valley State on April 14 in the final conference contest before the GLIAC Tournament.

Ferris won two matches last season in the GLIAC Tournament against Findlay and Wayne State on its way to a third-place finish. The Bulldogs last won the tournament in 1999 with a 5-4 victory over Northwood. n