The Ferris women’s golf team claimed its first victory of the season with a victory at the Tiffin Lady Dragon Invitational on Monday.

The Bulldogs shot 664 to claim the victory in the tournament. The University of Findlay finished second with 670 strokes. The seven-team tournament consisted of Ashland and Northwood, and Findlay, as well a few teams from Ohio.

Bulldog sophomore Blaize Baumgartner shot a two-round total of 162 to claim second place in the tournament in Tiffin, Ohio. Baumgartner shot 80 in the first round, followed by an 82 in the second round for a 162 total. The leader finished five shots ahead with a 157. Ferris freshman Ashley Swanson finished fourth for her second top-10 finish of the 2009-2019 season. 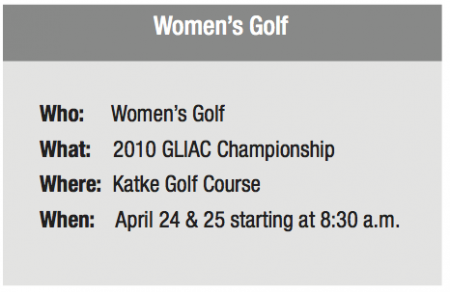 The second-place finish marked the first top-five finish for Baumgartner since the Northern Arizona Mountain Shootout in September. Baumgartner said she struggled some and did not hit as many greens as she would have liked, but credited her short game for her high finish.

Baumgartner said the win really helped the team’s confidence heading into the conference tournament this weekend.

Mignano said the event marked the second time this season that the entire team participated in a tournament. Mignano also said the team has been working hard to make swing changes and enhance their skills all season long.

“This win is exactly what they needed,” said Mignano, “It really was a team victory.”

The Bulldogs will host the 2010 Great Lakes Intercollegiate Athletic Association Championships this weekend at Katke Golf Course. Baumgartner said having the conference tournament on their home course improves the team’s chances.

“It’ll certainly help with our confidence,” said Baumgartner, “It shows the little stuff we need to improve before the conference.” n