The Torch conducted an online survey of more than 75 students asking about their involvement on campus.

Currently, Ferris has over 200 organizations on campus, including faith-based, professional and club sports.

Ferris junior Corey Buter is an active member in the National Guard and the ROTC at Ferris and said they teach him valuable leadership skills not typically found in the classroom.

Buter said he agrees grades are important. However, when an interviewer is faced with two people with similar grades, Buter said the person more involved on campus is going to stand out.

“I believe GPA should be looked at more, because when you apply for a job they want to see who did best in their studies related to the program, not what groups you have joined,” said Franzel.

Using the same research survey, the average number of hours working a week was 10. Concluding from 45 hours of school, 15 hours for organizations and 10 hours of work, students are looking at a 70-hour week.

Statistically, college students add over 30 hours a week of overtime trying to build their resume and pay for college.

Mel Matthews, a freshman in the elementary education program, said she wants to become an elementary teacher one day. Outside of class work, she works at the university’s Headstart program, and will apply to be an resident advisor on campus to boost job experience and help pay tuition. She said she is currently looking to get more involved at Ferris, but is making sure she does not overwhelm herself. 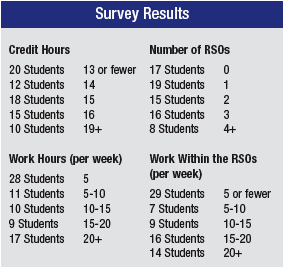 MarketingHelp! owner and adjunct marketing professor Blair Entenmann said as an employer, he looks for a variety of resume credentials.

“As someone who used to hire six to 10 college graduates every year, I would look for the best overall combination of grades, campus/volunteer organization leadership and work experience,” said Entenmann.

“Students are trying to get the most out of college,” said Wensel. “Most of them are here for only four short years and this is the time to get involved, build contacts for the future and learn a little.” n