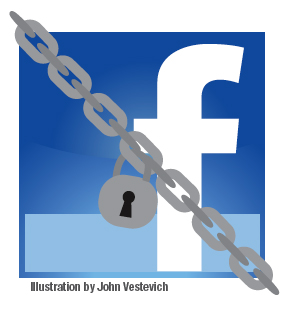 “Our worlds are getting much smaller and the lines that separate them are vanishing,” said DeVries. “We are moving into a very unprecedented new era.”

If used in the correct manner, DeVries believes social media sites aid in teaching and relating to students.

“Social media gives me a lot more flexibility to stay in communication with my students,” said DeVries.

DeVries warns of the dangers that come along with social networking as well and believes students should be cautious when using these sites.

“Students should absolutely be concerned about the image they portray on Facebook – that information can get out even if you’re really careful about privacy settings. Unfortunately, societal mores aren’t keeping up with the technology and you can (fairly or unfairly) have the content you share be used against you by people that aren’t as open-minded as we would hope everyone is. Some people won’t be willing to forgive ‘the college experience’ – so you can’t count on getting a pass,” said DeVries.

Students being friends with professors on Facebook raises many questions about boundaries. DeVries believes ground rules need to be established for student-professor online friendships.

“It’s vital that faculty and students both respect the nature of the relationship because there’s a power dynamic involved,” said DeVries. “The vast majority of students that I interact with through social media have sought me out after the class has ended when we no longer have Blackboard to facilitate communication.”

It can be very difficult for college students to decide whether or not to become Facebook friends with their parents as well.

“I think that being Facebook friends with parents is ultimately a great thing if the quality of the relationship permits it,” said DeVries. “To students, I would make the case that having their parents as friends might help keep them from doing some things they may regret later as well as help grow their relationship with their folks. To parents, I would make the case that they work to earn the trust of their children by being respectful of their privacy and ability to make decisions as adults by not being overbearing or snooping around.”

Taylor Cox, sophomore in manufacturing engineering, is very hesitant on being Facebook friends with his parents.

“I doubt I will ever be Facebook friends with them,” said Cox. “Sure, it would definitely help me think more before I say things, but at the same time there are things I don’t want my parents to know.”

“I think it’s important if you are going to have a Facebook relationship that you and your parents lay down ground rules before becoming friends,” said Cieslinski. “If the parents plan on being voyeurs, they should warn their children.”

Social media websites are fast becoming a tool for employers.

“When that day comes, they’ll be able to look up anything you’ve published that has been cached by a search engine like Google (which could go back many years),” said DeVries. “So someday, you could apply for a job and lose out to another candidate who has the same qualifications that you do (but who doesn’t have photos of them doing a kegstand back in college floating around the web?).”

DeVries doesn’t discourage students from using social media, as it is a great way to showcase skills and abilities to prospective employers. However, it’s important to use these sites responsibly and take advantage of privacy settings.

“As a final suggestion, I would say the best defense against the risks that lurk in social media is to monitor it,” said DeVries. “It would also be a good idea to go to pipl.com and search yourself to see what content is already out there; you might be surprised at what’s already out there.” n