Ferris Fest is just a couple months away and with Sean Kingston and Cartel being announced as two of the acts, FSU students are already getting pumped up for the show or wishing it was someone else.

Every year, Ferris Fest is put on by Entertainment Unlimited. The group must select an act and then plan everything involved with the show.

“Sean Kingston and Cartel will be performing and two other openers are still in the works,” said Lindsey Parker, junior in the music industry management program and EU special events coordinator. “There will also be a second stage where three bands consisting of FSU students will be chosen to perform between main stage acts.”

EU will be posting the acts as they are chosen on the Facebook Ferris Fest event page.

EU sends out a survey at the beginning of every year to all students to solicit their thoughts on what type of artist should be brought to campus. This year the survey was conducted through the new OrgSync program.

Some students feel that simply offering a survey is not sufficient in getting student input and that it isn’t completely representative of the campus because not all students fill it out.

“I don’t think enough is done to get input from students,” said Chris Vallier, senior in the criminal justice program. “They take a survey and give a list of bands, but that’s it. We should have more input and find better ways to get as many opinions as possible.”

Other students, like Samantha Watson, freshman in the sports marketing program, feel that EU does a good job getting input through the use of a survey.

EU is already receiving feedback to the acts that have been selected thus far.

“We are hearing a lot of positive feedback from students this year,” said Parker. “If a student doesn’t like Sean Kingston, they like Cartel or vice-versa.”

Some students are not thrilled by the acts though.

“I don’t like Sean Kingston and I don’t know who Cartel is,” said Charles Kempa, sophomore in the welding program. “Let’s get a rock band here like 3 Days Grace or Shinedown.”

“I mean, if Nicki Minaj were here with Sean Kingston that would be better,” said Vallier. “I would have preferred to see someone like Beyonce, Rihanna, or Jack Johnson.”

Other students are excited for the show though and think Sean Kingston was a good choice.

“I’m glad Sean Kingston is coming, I think he’s pretty cool,” said Tara Weaver, freshman in the pre-radiography and pre-medicine programs. “Cartel I only know one song from, so I’m not so impressed.”

Watson agrees with Weaver and said, “I think it’s very cool that Sean Kingston will be performing here.” 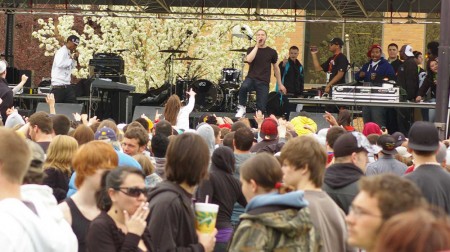 These students made suggestions on who they would have preferred; Watson would have loved to have had Taylor Swift and Weaver wanted Daughtry.

Other students, like junior in the hospitality program Greg Priester, believe the performers really don’t matter because students will go to Ferris Fest anyway.

“I would probably go to Ferris Fest no matter who was performing,” said Priester.

Parker said that EU is currently looking into having a country act perform at Ferris Fest so that the three most popular genres students wanted will be covered at the event.

“I feel that Ferris Fest is a campus event that students look forward to each year,” said Parker. “No matter who is performing, it’s always bound to be a good time.”

Ferris Fest will take place on April 16 from 12 to 5 p.m. in the quad. For more information, visit the Ferris Fest event page on Facebook or contact Parker at musicmarketer@nullhotmail.com. n