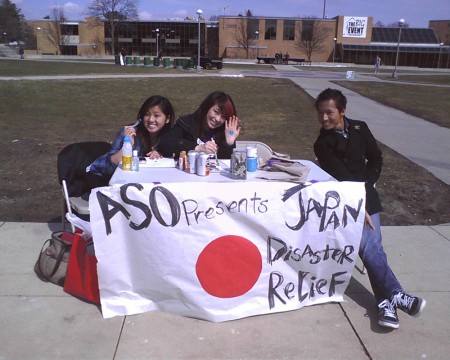 On April 7, FSU’s Asian Student Organization raised an estimated $120 from donations in the quad for Japan’s disaster relief fund.

From 12-3:15 p.m., the organization invited Ferris students to participate in colorful face and body painting.

“We wanted to catch students’ attention and have fun,” said Trihn.

On March 11, a massive earthquake struck off the coast of Japan devastating the northern part of the country. Recorded as a 9.0 on the Richter scale, it was the most powerful earthquake to ever hit the island nation. As of today, the death toll was an estimated 12,600. More than 14,000 people are still listed as missing. The cost to restore the damaged areas is an estimated $300 billion.

Still, many FSU students consider every donation a stepping-stone toward helping the devastated country.

Ferris student Patrik Culey said Japan’s government has been under a lot of financial pressure attempting to restructure the multitudes of damaged areas. Culey said getting people involved in the effort will help put the country back together.

“If everyone puts in a little, it will amount to a lot and take less pressure off of the government,” said Culey.

ASO public relations consultant Mailee Xiong said she believes donating to the tragedy is a concern everyone should participate in.

“Donating is important becuase it helps us stay grounded as good people and humanitarians,” said Xiong. “It only takes a penny a person to help.”