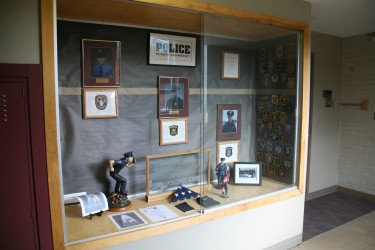 A South Dakota police officer and 2005 Ferris graduate died from injuries Aug. 2 after a shootout while in the line of duty.

James Ryan McCandless, 28, of Midland, attended Ferris on a scholarship to earn his degree in criminal justice.

McCandless was a police officer in Rapid City, South Dakota. The Rapid City Journal reported that McCandless, a six-year veteran of the department, died shortly after arriving at Rapid City Regional Hospital.

According to the Rapid City Journal, McCandless is the first city police officer shot dead in the line of duty since 1916.

While McCandless studied at Ferris, he worked at the Mecosta County Jail for three years – first as an intern and then later part-time as a corrections officer at the jail.

Wood said he was working his way through Ferris to become a policeman as a full time student while working with Mecosta County Law Enforcement.

“You lose a brother,” said VanderKooi, who has been in law enforcement for 30 years and taught McCandless in the academy. “Unfortunately, you have to go in harm’s way as a police officer. This is the result sometimes.”

McCandless was described as an “excellent” student who took his classes and his profession “very seriously,” according to VanderKooi.

“He was a good worker and well liked by everybody,” said Wood.

McCandless had recently gotten engaged and purchased a house before his death.

“We’ll make sure that at least he’s in our hearts. His picture will be in the hallway for people to see as they walk by. They’ve got to keep that in their minds that this is part of the business,” VanderKooi told the Pioneer. n