The Big Rapids community slipped into their stilettos and lined up along Michigan Avenue for the second annual Stiletto Sprint.

Beginning Oct.17 at 6:00 p.m., the race began near Chemical Bank with racers sprinting toward Maple Street.

Unlike last year’s Stiletto Sprint, this year’s event involved three separate races including a men’s race, a women’s race and an “anything goes” race. Participants were required to wear a minimum 3-inch stiletto heel to qualify for the men and women’s race.

The “anything goes” race was shortly followed by the men’s race. Big Rapids resident Darin Cebulla said he decided to take off work to be a part of the event. Dressed in a blonde wig, tutu skirt and pink leotard wearing the number 50, Cebulla won the men’s race beating out three other racers.

“It always feels good to win, especially when the money goes towards a great cause,” Cebulla said.

Followed by the men’s race, the women’s race included over two-dozen women from FSU organizations such as You Beautiful Black Women (YBBW) and local business owners racing for the title of this year’s Stiletto Sprint champion. 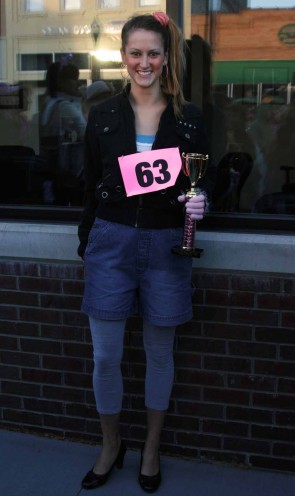 Orkisz said she got involved in the competition because of the support the Stiletto Sprint received from her organization.

“I was pretty excited. I’m very big into competition and it helps to know it was for a good cause,” Orkisz said.