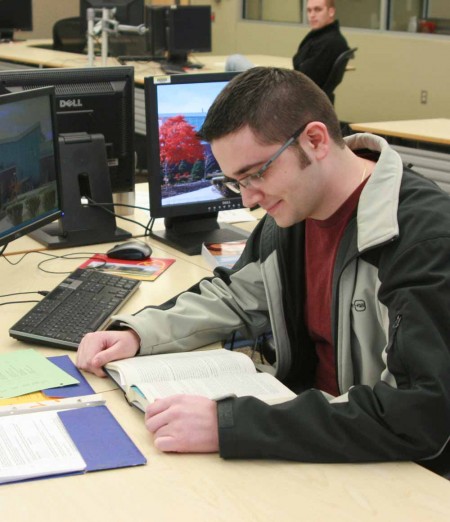 In just over a week, FSU student Mike Ross will be walking across the stage and moving onto the next big step in life.

Ross, a construction management major, has been at Ferris State for four and a half years. Although he said he enjoyed his time here, he is eager to take on what the future throws at him.

“Five years ago, I knew I would graduate, but I didn’t think I would come as far as I have,” Ross said. “I didn’t know what the future would bring, but now that I have gotten to this point and accomplished what I have, I’m excited for the things to come,” he said.

In January, Ross will be starting work in Chicago at Pacific Construction Services as the Assistant Project Manager. Last summer, he was hired there for an internship.

“Before I got the internship, I was nervous about finding work. I knew I needed some experience to be of interest to future employers and I was lucky enough that they [Pacific Construction Services] gave me an internship and offered me a job after graduation,” Ross said.

“I think there is a future there for me. They definitely gave me a big break and taught me so much this last summer. I could see myself working for them for a long time.”

“I looked to my dad as a role model when it came to construction, but another role model I have had is my girlfriend, Erica. We’ve been together for four years and she has pushed me to get the grades I do,” Ross said.

“Sometimes I have a lack of motivation, and she gives me that motivation. Without her, I don’t think I would be where I am,” Ross said.

For Ross, the next big step is getting into the real world and acclimating into the world of business instead of the world of education. He added, one day he wants to have experiences and tell stories like his professors have throughout the years.

The earlier ceremony will take place at 10 a.m. and the afternoon ceremony will begin at 1:30 p.m. Approximately 550 students will be graduating.

In order to attend graduation, spectators must have a ticket. Tickets are not available to be purchased at any time. Students who need additional tickets are encouraged to talk to fellow graduates.

For more information regarding the graduation commencement, visit ferris.edu/HTMLS/current/Commencement/decemberceremony.html.