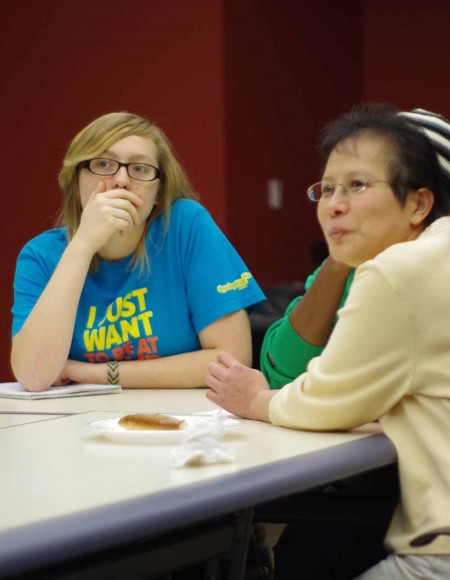 Ferris State University’s Global Initiative opens a channel of communication through a diverse religious dialogue and its Global Reflections series.

A group of eight joined together to attend the dialogue. After being split into two groups, they began to participate in an exercise in which they were told to choose either X or Y. Without knowing the object or point behind the game, participants began to discuss and negotiate. Throughout 10 rounds, each person thought of different solutions for which they believed would benefit the group.

The teams negotiated together as well as split up into non-binding negotiations in which one team member had to convince another team member of the opposing team which letter to choose while backing it up with valid and convincing reasons.

As it got deeper in the rounds, some group members became more aggressive and began to get competitive. As it started getting to the end, the groups had decided on a plan to negotiate where they would both benefit.

Neither group had won but in fact it was based on a game called “Prisoners Dilemma” in which their decisions of X and Y were solely deciding the outcome of someone else’s actions in a made up crime.

“I thought this was a really fun activity,” Ferris freshman, pre-pharmacy student, Erika Segraves said. “You got to see how a large group of people interact and what it will be like when we start working.”

Global Reflections is part of the Globalization Initiative, a campus-wide project meant to increase global awareness at Ferris and in the Big Rapids community. The theme this semester is “Ubuntu,” meaning corporation.

The discussion explained how this exercise could be brought into a bigger idea of the question of why some things have to be competitive.

As the groups worked through the exercise they started out having distrust, but through negotiation and working together they were able to form an agreement. This also plays out on a larger scale and fits with how trade works globally.

“You don’t see this kind of stuff,” FSU sophomore in electrical engineering Simon Brown said. “It gives you different views on ways to reason which each other.”

“This is a layer of global learning that’s not just in a textbook,” Dye said. “In class students are always being taught at, this gives a chance for everyone to discuss and share together.”

Discussions on Global Reflections are held every other week at 11 a.m. The topics are based on the Ubuntu theme, as well as language and country. For more information, contact Dye at dyet4@nullferris.edu or contact the Global Reflection Committee.