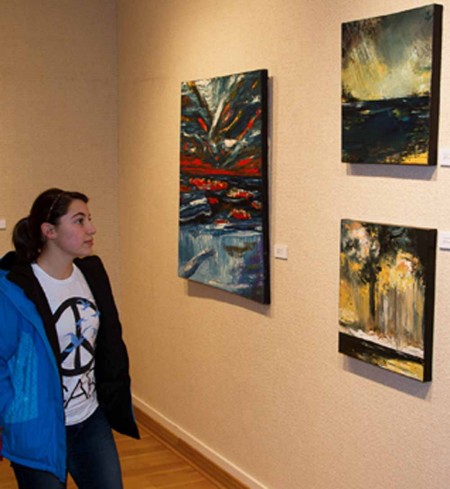 Artist Sheryl Budnik is deviating from her normally idyllic sea and sunset themes to confront uncomfortable truths about natural disasters in the world.

Alongside her calm scenes, she also has paintings of natural disasters such as volcanoes, earthquakes, and forest fires. Her art display “Chaos & Calm” will be in the Rankin Art Center until Jan. 21.

Her art takes viewers on a journey from paintings of picturesque lake scenes to fiery volcanoes. Through this contrast, she draws attention to the fragility, as well as beauty, of our world.

Carrie Weis, the Rankin Art Gallery director, was initially drawn to her artwork because of its unique perspective and technical skill.

“Part of my goal here is to always have exhibits that are unique and unusual and something that we haven’t shown in the past,” Weis said. “Her work is different in the sense that it’s kind of a classical style of painting but it has a real contemporary theme. The concept behind her work is all about the environmental issues we’re dealing with in today’s world.”

Tamira Owens, FSU freshman in international business and study abroad, was interested in the way Budnik was able to evoke different feelings through her paintings. “You could just feel the emotion in it,” Owens said.

In a prepared statement about why art is important, Weis said, “Art is a language, not much different than any written language; it provides a voice for a large number of people who are visual thinkers, who are interested in seeing and experiencing something new.”

Louis Kostielney, FSU junior in political science education, enjoyed the exhibit. “I thought it was really colorful; I liked the theme of calm versus chaos.” He liked that one of the paintings, Cargo Ship Sinking, was somewhat ambiguous. “It’s not exactly a clear picture; you have to figure it out a bit,” Kostielney said.

“She’s blending some art history with some modern day issues,” Weis said. “They’re beautiful to look at, but then they’re also juxtaposed with this issue of things that are really ugly.”