The nationally top-ranked Bulldogs are now just one league point away from hanging a Central Collegiate Hockey Association regular-season championship banner in the Ewigleben Ice Arena.

Ferris secured at least a share of the CCHA crown after the Bulldogs swept visitors Bowling Green State Feb. 17-18.

The Bulldogs began their series with Bowling Green Feb. 17. Ferris trounced BGSU 5-1 in the first night of the series. Five Ferris skaters netted goals, while 12 Bulldogs picked up points.

Ferris went onto finish their sweep of Bowling Green with a 4-1 victory Feb. 18 and clinched a first round bye in the CCHA Tournament. The Bulldogs are on the longest current unbeaten streak in collegiate hockey, 14 games. Ferris is 11-0-3 since the new calendar year. 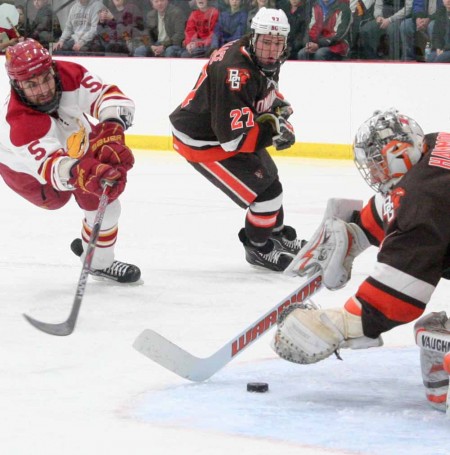 The Bulldogs depth was displayed against BGSU. All four Bulldog lines managed to register points against the Falcons.

“No matter what forward line is out there, there’s a chance the puck could end up in the net for us,” senior net minder Taylor Nelson said.

Ferris will hope to place a banner next to the 2002-03 Bulldog Hockey team’s regular-season championship banner. But first the Bulldogs must earn at least one league point in their series against Western Michigan Feb. 24-25 to have their own outright championship.

“We’re excited that we have a share of the title but at the same time we don’t want to share it. We want to have this thing outright,” Nelson said. “We’re really excited for this upcoming weekend and we want to win it all.”

Otherwise, the Bulldogs will share the championship with the nationally 3rd-ranked University of Michigan if the Wolverines can sweep BGSU in the two teams first meeting of the season and on the road this upcoming weekend. Michigan’s record on the road may be in Ferris’ favor since the Wolverines are 4-5-3 when away from Ann Arbor.

Some bad blood is between the Bulldogs and Broncos. Ferris was knocked out of last years CCHA playoffs by Western Michigan. Ever since then, the two teams have treated each game as a rivalry.

The Broncos will need to score against Ferris’ nationally 8th-ranked goaltender Nelson, who has compiled a .925 save-percentage and a 17-4-2 overall record this season.

Ferris will have the fourth-best team defense in the nation protecting the Bulldogs defensive zone. Ferris’ defense allows just 2.12 goals a game on average. The Bulldogs have the highest nationally ranked defense out of the teams in the CCHA.

“We don’t like losing, and especially to Western,” Nelson said. “They’re fighting to keep a first round bye and we’re fighting for an outright championship. It’s going to be a hard fought playoff style battle.”

This time around Ferris will travel to Kalamazoo for the first game of the series and then finish back in Big Rapids for the series finale and final regulation game of the season. The puck will drop at 7:05 for both games. FS Detroit will televise the game in Kalamazoo on Feb. 24. Ferris will have a sold-out crowd cheering them on Feb. 25.