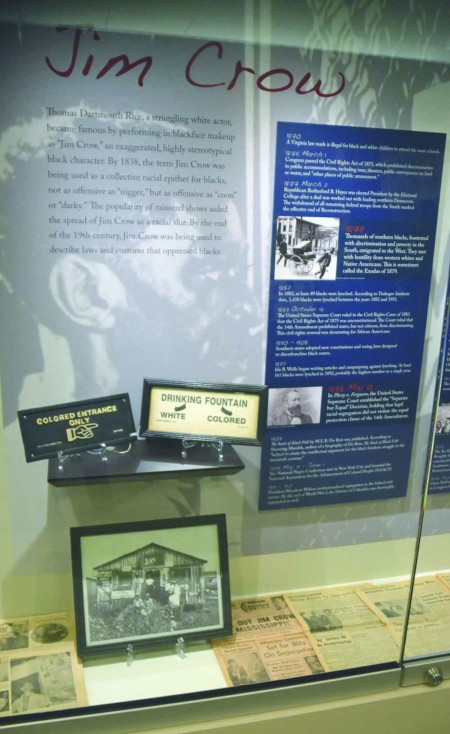 The Ferris campus was in chaos nearly 50 years ago as race riots threatened to tear the university apart.

Today, the Jim Crow Museum utilizes its vast collection of historical and contemporary racist memorabilia to repair racial relations through education and without exonerating history.

Vice President of the Office of Diversity and Inclusion Dr. David Pilgrim donated over 3,000 objects to the museum in 1996.

“Objects reflect and shape the attitudes we have about a group of people,” Pilgram said.

Among the items on display are pictures and articles detailing the 1968 Ferris race riots. The situation came to a head in May 1969, following multiple arrests by state police during a sit-in at the Administration Building.

In March 1968, the police were rushed to campus after receiving a call from then-Ferris President Dr. Victor Spathelf.

Police arrested 263 African Americans for trespassing, according to an Associated Press publication on May 20, 1968, which recapped the events as background for a new report.

According to the article, multiple Ku Klux Klan posters were found hanging in the common areas of a residence hall. The series of stories can be viewed via an online scrapbook collection on the university’s website.

The scrapbook was created by current Chairman of the Ferris Board of Trustees Ron Snead, who attended Ferris during the Civil Rights Movement. Snead was the President of the Ferris chapter of the National Association for the Advancement of Colored People (NAACP) and was among those arrested during campus protests.

“One of the things we want to do is to address the belief among some that issues concerning race are confined to the past,” Pilgrim said. “The museum forces people to have a conversation about race. It’s hard not to when you’re in that room.”

Today, the museum, which last year moved to the basement of FLITE, showcases more than 7,000 items.

Pilgrim purchased his first item when he was an adolescent. The first item was a saltshaker with racist overtures. He intentionally smashed the item on the ground shortly after its purchase.

The term Jim Crow is synonymous with racial injustice systems incorporated in post-Civil War America, which included the lynching of African Americans and the segregation system fused in not only schools, but daily life as well.

The museum also focuses on controversial court rulings regarding race. In the Supreme Court’s 1954 ruling in Brown vs. The Board of Education, school systems were asked to de-segregate as the legality of segregation was overturned. But it was a ruling without true enforcement action, according to Neil Baumgartner, a staff docent for the museum.

Pilgrim attended a segregated elementary school in Alabama during the 1970s. His middle school attempted to integrate, but was met with resistance by the students’ parents and other adults in the community. The resistance was sometimes displayed with physical violence.

Physical violence on racial grounds did not end with the conclusion of the Civil Rights era.

Also found in the museum is an “I am Trayvon” hoodie. The sweatshirt was a reactionary item created to raise racial discriminatory awareness following the February 2012 death of 17-year-old high school student Trayvon Martin. Martin was allegedly shot and killed by George Zimmerman, Florida resident and neighborhood watch coordinator.

Zimmerman claimed the shooting was in self-defense, although Martin was not found in possession of a weapon. On the national front, alleged racial bias was seen as a deterrent for Zimmerman’s arrest. He was later arraigned on second-degree murder charges and is awaiting trial.

On the Jim Crow Museum website, visitors will find a shooting target in the likeness of Trayvon that was available for sale through an unknown distributor. The target is shown with a black hoodie, a bag of Skittles and a can of iced-tea—all items that were on the victim at the time of death. All of the targets, which were produced with the explicit purpose to make money, were sold, according to Pilgrim.

The museum is open Monday through Friday from noon until 5 p.m. More information can be found online at ferris.edu/jimcrow/.