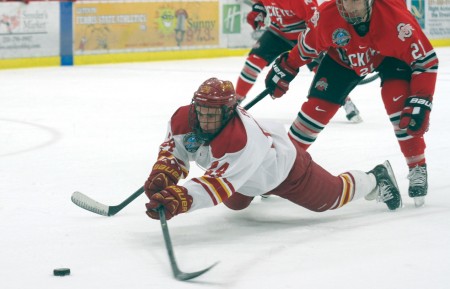 Ferris began winter break without a win in its last three games. During break the Bulldogs faltered against the league’s ninth effective offense, versus MSU in Munn Arena, before being bested in a 2012 Frozen Four rematch against nationally 16th-ranked Cornell, which led to a five-game losing streak.

Ferris ended its five-game curse in a 6-2 win Dec. 29 against Minnesota-Duluth at the Florida College Hockey Classic. The match-up was a preview between two Bulldog teams who will share the Western College Hockey Association in the 2012-13 campaign.

In Ferris’ Jan. 11-12 return to a full-campus and maximum capacity crowd at Ewigelben Ice Arena, the Bulldogs were pitted against Ohio State University. The Bulldogs were unable to force a puck past Ohio State’s nationally top-ranked goaltender Brad Hjelle early enough to avoid a 3-1 loss Jan. 11.

The Bulldogs failed to pass a puck across the line of assurance until 11:13 had dwindled off the third period clock. Sophomore forward Justin Buzzeo notched his fourth goal and seventh point of the year in the Bulldogs’ loss.

Ferris redeemed itself in a 3-1 win over the Buckeyes Jan. 12. The Bulldogs secured a two-goal lead by the end of the first period, which provided enough padding to avoid a Buckeye come-back, while Motte and the Bulldog defense fought to keep Ohio State out of the Bulldog zone. OSU outshot the Bulldogs 19-11 through the final two periods of the game.

Since Dec. 1, the Bulldogs are 3-5-1 with an away record which reads the same.

Ferris Bulldogs will need to find a way to be more effective during road games if they hope to remain eligible for a top-seeded position in the Central Collegiate Hockey Association’s regular season playoffs. The Bulldogs will be on the road for seven games of the 12 remaining in the season. Among the six teams scheduled in Ferris’ future, Notre Dame and Western Michigan have been consistently ranked in the nation’s top 10 since Oct. 29, 2012.

This year’s first home and away series for the Bulldogs will begin at Michigan State Jan. 18 and end in Ewigelben Ice Arena Jan. 19. The puck will drop at 7:35 at MSU and 7:05 at Ferris. Ferris is 2-2-2 at home in Saturday games this year.

Anastos and the Spartans were stalled by stormy weather 10 miles south of Big Rapids. Anastos’ anger stewed on the malfunctioning travel bus. He wanted his team’s issues addressed immediately.

The Spartans spent two hours studying the loss over and over again until the message stuck in the players’ heads.

Anastos was unsettled by MSU’s inability to score, maintain the puck in the Bulldogs’ zone and emphasized that the Spartans must finish their offensive looks with more focus on utilizing puck rebounds closer to the net.

Michigan State split a two-game home series Jan. 11-12, with nationally fifth-ranked Notre Dame (USCHO). The Spartans were blanked, 1-0, by the Irish on Jan. 11 and triumphed 4-1 against the Irish the next evening. MSU kept the CCHA’s top scoring offense, which averages 3.38 goals a game, to just two goals scored throughout the series.

Ferris should expect a switch-up in the Spartans’ line pairings, and if Anastos’ coaching has made an impact since MSU’s last visit here, then his team will be expected to play less passively than in prior meetings.

The Spartans will have freshman goaltender Jake Hildebrand in net. Hildebrand has the second-best save percentage in the league at .947-percent. He has allowed 1.67 goals on average through 12 games, with a .375-percent win percentage.

At this point in the season the Spartans have scored an average of two goals a game while they have allowed 2.68
goals per game.