To reminisce about Ferris State’s days in the Central Collegiate Hockey Association is natural at the moment. There will never be a regular season CCHA game at Ewigleben Ice Arena again with realignment on the horizon.

Hockey is an integral part of life, not only in Michigan, but also in the Big Rapids area. Members of the community come out weekend after weekend to see their Bulldogs play, no matter the state of the team.

Last season was a gift for Bulldog fans, as Ferris alumni and former Bulldog goaltender Taylor Nelson carried Ferris State all the way to the National Championship game.

This season has been much more of a roller coaster ride, as evidenced by the series that took place last weekend on Feb. 15-16.

“It was all kind of a whirlwind before the game,” Bulldog senior left wing and captain Kyle Bonis said. “It’s been a great ride.”

The Bowling Green State Falcons were able to capture a heartbreaker, ruining sophomore goaltender CJ Motte’s shutout in the closing minutes of regulation, and firing a shot to the collective heart of the Bulldog faithful in overtime.

Bonis would not accept this as the end of CCHA play for the Bulldogs in front of his home fans. Bonis tallied his 44th and 45th career goals in the first and second game of the series, respectively.

“Sometimes when you get kicked down a little bit, the next night is more telling of a team’s character than anything else,” Bonis said. “I thought we came out strong and we played a grittier game.”

In that second game, Bonis’ goal helped in an effort that at times looked like it may be negated once more. In front of the biggest Dawg Pound in the program’s history and 2,565 fans, Bonis found the back of the net short-handed with just under a minute remaining in the first period. 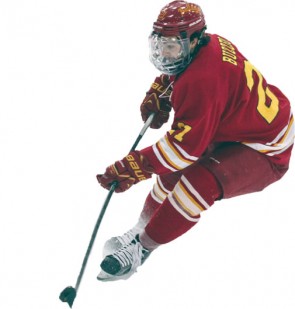 “I’m hoping that’s definitely not our last game in front of those fans,” Bonis said.

Ferris junior left wing Garrett Thompson would bookend the scoring for the night, breaking the 3-3 tie with a power play goal with less than three minutes remaining in the second period.

In typical Bulldog fashion, they played out the last minute and a half with their gritty defensive style, blocking two shots despite the Falcons’ extra attacker.

“For the guys to come back tonight and really battle; overcoming and showing we could hold on to that lead and still win and grind that out was really important,” Ferris head coach Bob Daniels said.

The 4-3 win kept Ferris State in fourth place in the standings, tied with the Ohio State Buckeyes. Ferris’ win on Senior Night was especially important in jockeying for postseason position.

The Bulldogs will travel to the University of Michigan to take on the Wolverines on March 1-2. The Bulldogs have just that one series remaining and hold the edge of a single regular season win over the Buckeyes.

Ohio State has two series remaining, including a match-up with Michigan this weekend and a trip to Oxford to take on the Miami (Ohio) Redhawks on March 1-2.

In order to guarantee a home playoff game, the Bulldogs must win both games against Michigan and have Ohio State lose at least two of the coming four; otherwise, the Bulldogs will travel to Columbus, Ohio for the first round of the
CCHA playoffs.