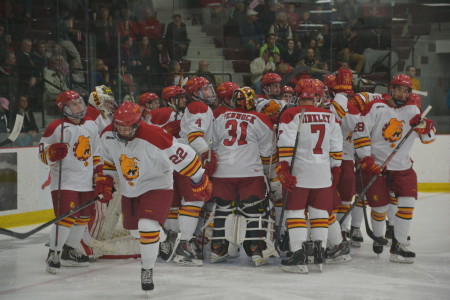 The Ferris State Hockey team fell to St. Lawrence in their 2013-14 home opener.

There are games where the hope inside a building is tangible. On half of those nights, the deflation of that hope is also tangible.

It was a massively audible groan that echoed around the rink when the clock ran out on Ferris State, giving the St. Lawrence Saints a 3-2 victory.

Though some of the fans were audibly surprised, Coach Daniels gave sophomore goaltender Charles Williams, who most recently lost a 1-0 decision at Colgate, the nod to start the home opener.

The move wasn’t unexpected inside the locker room; Coach Daniels made it clear that he was impressed with Williams both last year and this offseason, and that he would push last year’s starter, junior CJ Motte.

The Bulldogs set an aggressive tempo to start the hockey game. Despite the lack of an early goal, the ice was tilting towards St. Lawrence goaltender Matt Weninger.

The scoreless tie was broken with less than a minute remaining in the first period when junior left wing Justin Buzzeo put home a nice feed from senior center Garrett Thompson, which was good for the first goal in Ewigleben this season.

Junior defenseman Jason Binkley ended up in the box with less than two seconds left in the first period, which ironically set up the next goal for the Bulldogs.

At 1:07 in the second period, Justin DeMartino made the most of Cory Kane’s foiled breakaway attempt, when he tapped in a shorthanded goal to put the Bulldogs ahead 2-0.

“It was Cory Kane who was out there and we got a breakaway with the puck there,” DeMartino said. “I followed the play up even though we were shorthanded, so after the goalie made the save I stayed in the high slot there and [Kane] was able to find me.”

The 2-0 lead didn’t have much time to sink in. St. Lawrence chipped away at the deficit with a goal at the 3:31 mark when Drew Smolcynski scored his first goal of the season.

The Saints went on to tie the game at 17:21 in the second when Brian Ward launched a heat-seeker that found its way past Williams and underneath the bar off of a nifty pass from Gunnar Hughes.

St. Lawrence carried the play to begin the final period, though they couldn’t crack Williams early.

At 13:36, a bad turnover in front of Williams caused the puck to jump around, landed on the opportunistically placed stick of Smolcynski, who scored the go-ahead goal on puck that trickled past Williams briefly before being batted out of the net.

Despite a late skirmish, a late penalty to DeMartino dampened most of the Bulldog’s efforts. The game ended with a scrum in the corner and nary a chance with the extra attacker.

Many spectators who entered free with their student ID’s may not have been expecting the result they were handed from St. Lawrence as it, but Daniels disagreed with the notion that this team was an early season pushover.

Among the line up shuffles that lead into the game included a move from the back end to the forward lines.

Sophomore defenseman Brandon Anselmini not only moved to forward, but he started at wing. Anselmini even spent time on the powerplay and penalty kill.

“I feel like Anselmini is a pretty high skill player,” Daniels said. “I’m hoping that some of those skills can transfer to offense just because we have so many quality defensemen, and we’re looking to get our best 20 players in the lineup.”

Daniels noted it was not totally due to injuries to some of his key forwards. Daniels made it clear after the game that it was hard to keep any defensemen out of the lineup because of how highly he thinks of the whole unit.

This says a lot about freshman defensemen Ryan Lowney, who has seen extended ice time so far this season with veteran defensemen like Binkley.

The loss dropped Ferris to 2-2-0 on the young season, and they will get a chance to avenge the loss tomorrow, Oct. 18, at 7:00 in the final game of their set with St. Lawrence.