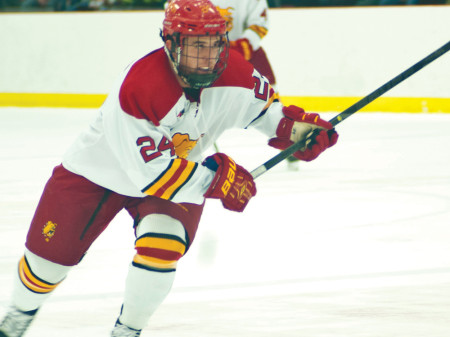 A junior hockey forward opens up to the Torch. This is Dom Panetta, off the record.

Torch- What is hockey to you?

Torch- When did you first hit the ice?

DP- I was skating before I could walk; my mom tells me it was around 18 months old. She was a figure skating coach growing up, so instead of hiring a babysitter, she would strap skates on me and let me wander the ice. If I got in timeout they would put me on top of the hockey nets because I couldn’t get down. Let’s just say I spent a lot of time on top of the net.

Torch- At what point did it become your passion?

DP- It was always a passion, but the one moment that sticks out is when I was 14 and I decided to apply to a prep school for hockey by myself. When I got accepted I told my parents and they supported my decision. I left all my childhood friends for hockey. That’s when I knew I wanted to take it more seriously.

Torch- Growing up in Michigan, where did Ferris State rank among the schools you wanted to skate for?

DP- I actually grew up around Big Rapids and I moved away when I grew up. When I said my mom was a figure skater, she was the head figure skating coach in Big Rapids. I used to go to the Ferris games as a kid and I’d always bring Brutus the Bulldog a bag of cookies. It wasn’t a hard decision when they asked me to commit. I felt like I was coming back to where it all began.

Torch- How far removed do you think this program is from a national title?

DP- It’s not too often you know what kind of team it takes to make it all the way. Being on that runner up team helps give me an idea. The team we have this year is capable of being great. I think if we have a shot anytime soon, it would be this year.

Torch- In your own words, characterize your style of play.

DP- Have you ever seen that “nasty honey badger” video on YouTube? That’s the best way I can describe the type of player I am.

DP- (laughs) My coach would probably back you up on that statement.

DP- That’s a tough one, but you can’t beat Miracle, especially when I’m watching it with my Canadian roommates. In your face, Buzz!

Torch- I can imagine the Olympics is a tense time in the locker room. Who is the biggest ladies’ man on the team? Excluding Coach Daniels, we all know he knocks them dead.

DP- (laughs) I don’t think any of us really know how to talk to girls. Besides, it’s a known fact that girls at our school should stay away from hockey players.

Torch- That seems about right. What’s your best pick up line?

DP- I usually go to our goalie, CJ Motte, for pickup lines. He’s got many to choose from, but if I would have to pick one off the top of my head, I’d say “Hey cutie, I’m not your typical hockey player, I respect women.”

DP- People who contradict themselves, and when coach yells at me.

Torch- What are people surprised to find out about you?

DP- That I have all of my teeth.

Torch- Last question, what’s your prognosis on the outcome of this already stellar season?