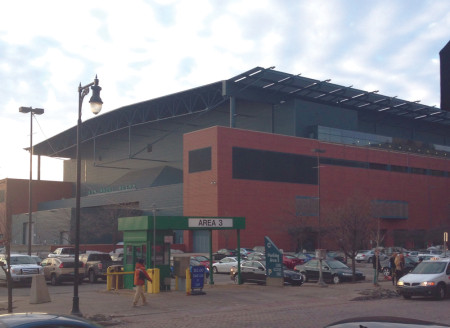 The doors to the WCHA Final Five open a day early for fans, where the red hot Ferris hockey team will compete on March 21-22 at Grand Rapids’ Van Andel Arena.

Ferris advanced to the Final Five by sweeping Bemidji State University on March 14-15 in Big Rapids.

The WCHA regular season champions will roll into the Final Five preparing to play Alaska Anchorage in the semi-final game. The Bulldogs swept the Seawolves on Feb. 21-22.

The Ferris athletic department is offering two packages for students to help them cheer on the Bulldogs in Grand Rapids.

Option one gives the buyer bus transportation, a ticket to the Friday night semi-final game vs. Alaska Anchorage and a t-shirt. The Bus leaves from the ice rink at 4:30 p.m. The package costs $20 and is limited to the first 250 buyers.

The second option also costs $20 but only includes a ticket. Students must show a valid Ferris Student ID to reserve a package. No reservations will be accepted over the phone.

In addition, the first 100 who sign up for the bus trip will receive another free ride on Saturday if Ferris wins on Friday, though fans have to purchas tickets again for Saturday which will cost an additional $30.

This marks the first time the Final Five (really the final four, but the brand name remains “Five”) has been hosted in Michigan. On Thursday, March 20, beginning at 4 p.m., the Final Five Kickoff will begin at the Deltaplex. The Kickoff will highlight an extra day of celebration for the long road to the WCHA Playoff Championships and is free to the community.

“This event is for both the community and traveling hockey fans to celebrate the sport of hockey and share in the excitement of the WCHA Final Five tournament coming to West Michigan,” said Mike Guswiler, president of the West Michigan Sports Commission. “We encourage fans traveling in for the tournament to come in a day early to enjoy the kickoff event festivities and local hospitality, plus our local residents to come out and celebrate this exciting event right in our backyard.”

One of the more anticipated events of Thursday night will be The Voice singing contest, which will begin at 6 p.m.

Contestants are asked to sign up prior to the competition, either on Facebook or when you arrive at the WCHA Kickoff. One winner will be chosen after two rounds of singing. He/she will receive a $25 gift card to Peppino’s Pizzeria and Sports Grille, tickets to the WCHA Final Five hockey games, and the opportunity to sing during the WCHA Championship game.

Tickets for the WCHA Final Five can be purchased at Van Andel Arena, the DeVos Place Convention Center box office, online at ticketmaster.com or at any Ticketmaster outlet.