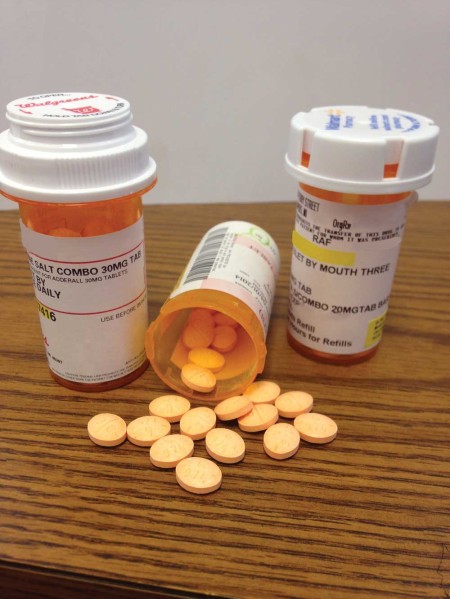 College finals weeks can be one of the most stressful times in a young adult’s life, and some students turn to drugs, legal and illegal, to take the edge off.

Throughout the last week of school, students are pushed to their mental limits as they cram as much studying into one week as they can to prepare for final exams. To stay up during the grueling study nights, some students guzzle coffee by the pot and some resort to the ol’ self-face slap. Other students, though, turn to drugs, prescribed or other, to combat the effects of exam week.

“I am prescribed to Adderall, and I do use them during exam week,” sophomore graphic design student, Hayley Bunschoten, said. “It motivates me to get things done. It makes you focus on whatever you want to focus on whether it be schoolwork or video games.”

Bunschoten has been prescribed Adderall for three years, and takes them regularly. After beginning to take the drug, which is prescribed to treat attention deficit hyperactivity disorder and narcolepsy, Bunschoten saw her GPA rise from 3.3 in high school to 3.9 in college.

Adderall, just like any prescription drug, can be abused. The drug, which is classified as a schedule II narcotic, is notorious around college campuses as it is sold to non-prescribed students to help them stay awake and focused during study times. The illegal selling or buying of Adderall, or any other prescription drug, can land the person a fine of $10,000 and up to seven years in prison.

“I think during exam week, if people who are not prescribed to Adderall take it, it is not a huge deal,” Bunschoten said. “From what I have seen, everyone has the same impact from it.”

The use of Adderall and other similar drugs, such as Vyvanse and Concerta, carry many negative side effects that can be harmful for those who do not need it.

“I feel irritated all day, I’m mentally not hungry, my feet sweat, and it’s really hard to fall asleep,” sophomore graphic design student, Alex Johnson, who has been prescribed Adderall for two years, said. “The side effects aren’t fun, but I know I need the Adderall to maintain good grades.”

Apart from prescription medications, many students turn towards other illegal substances to either gain an edge or to take the edge off. Students have been known to partake in binge drinking and many students smoke marijuana to battle the immense stress they are under throughout exams.

Either way, the use of prescription drugs without the authorization of a doctor or the use of criminal substances overall is illegal. Abusing drugs to combat stress or to stay awake is dangerous and can become life threatening, so the best way to avoid the symptoms is to not use said substances at all.

“If the use of illegal drugs helps you perform better in school, you’re cheating,” said Emily Frew, a junior studying medical illustration at Kendall College of Art and
Design. “Getting through anything in life with that kind of aid is a synthetic way of living. You can get through any degree of hardships without the use because you are strong and adaptive.”