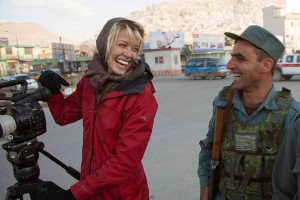 Every picture tells a story. In the U.S., mass media has made it easy to share photos, but the Afghan subjects of the documentary, “Frame by Frame,” didn’t always have this luxury.

Co-directed by Big Rapids High School alum Mo Scarpelli, “Frame by Frame” was shot exclusively in Afghanistan, where photography was made a crime under Taliban rule from 1996 until 2001. The documentary follows four Afghan photojournalists amidst a “photography revolution” after the Taliban regime fell from power.

Scarpelli will present the documentary as a part of Ferris State University’s annual “Beyond” event series at 6 p.m. on Tuesday, Sept. 15, in Interdisciplinary Resource Center room 120. After the screening, Scarpelli will do a question-and-answer session with the audience.

“Big Rapids seems like a perfect place to show the film,” Scarpelli said. “Before travelling to Afghanistan, my perception of the country had a lot to do with 9/11. There’s an innate tie with people in Big Rapids and Afghanistan, a strong one if it’s mired in tragedy because of the war.

In 2013, Scarpelli and co-director Alexandria Bombach raised funds to produce the movie through a Kickstarter campaign. Scarpelli explained why she thinks “Frame by Frame” is an important story to tell.

“The government was trying to control whether or not people could convey what they were going through,” she said. “Photography is a way to capture the identity of your country.”

Taylor Hooper, program manager for the “Beyond” series, said she is excited to host “Frame by Frame” for Ferris students, especially as it relates to this year’s “Beyond” theme, globalization.

“It’s important that students understand how globally connected we are and how their lives and jobs will be immensely impacted by globalization,” Hooper said. “We hope this documentary will provide a unique angle to the lives of the people who live in Afghanistan. We often only see this part of the world portrayed through war, so our hope is to show students a different side.”

To learn more about “Frame by Frame,” visit framebyframethefilm.com/bigrapids.