Ferris State fans have been blessed with the opportunity to watch some incredible athletes showcase their skills the past few years. At the top of the list of those players are two outstanding seniors who either by coincidence or fate share similar last names.

Jason Vander Laan and Megan Vander Meer are not related, but they are both unbelievably skilled at what they do and they have the credentials to prove it.

Vander Laan, a Frankfort, Illi. native and product of Chicago Christian High School has been an unstoppable force on the football field ever since he put on his No. 15 jersey for the Bulldogs. He brought the first ever Harlon Hill Trophy to Ferris State and holds a career record of 29-8 at the quarterback position.

Vander Laan’s fellow athlete Megan Vander Meer has also made a name for herself in a Bulldogs’ jersey.

The Grand Rapids, Mich. native has been impressive for the Ferris State volleyball team and has been one of the best players on a 12-1 Bulldog team that is ranked No. 2 in the nation. Earlier this season, Vander Meer was given the American Volleyball Coaches Association (AVCA) player of the week award, an honor that has only been given to a Ferris State player on one other occasion.

Vander Laan had nothing but nice things to say about Vander Meer.

“Megan is a great volleyball player and a great person. One of the kindest people I know. She also is very fun to watch and can kill it at volleyball,” Vander Laan said.

Vander Meer had similar opinions toward the Ferris State quarterback.

“I think he’s an awesome athlete, and he’s so humble even throughout all of the success he’s had. He’s also so genuine when you talk to him,” said Vander Meer.

The support doesn’t stop there for these Ferris State stars and their teams. Oftentimes, members of the football team will help to pack the gym for a home volleyball match, just as the women of the volleyball team will cheer on the Dawgs on the gridiron.

Of course, there is more to these two Bulldogs than what they can do on the field or the court. Let’s play a game of “Vander-Who?” Can you guess who said what? See below for questions and answers. 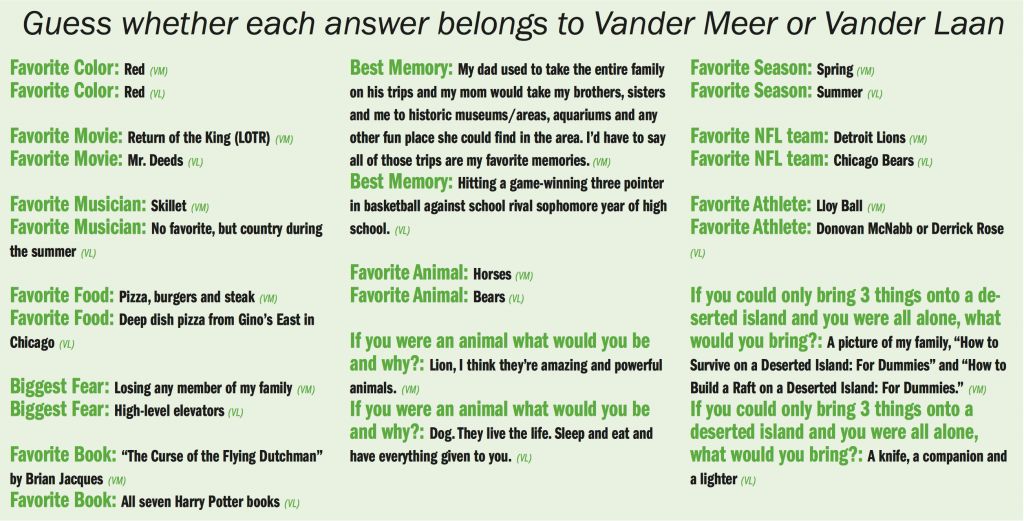