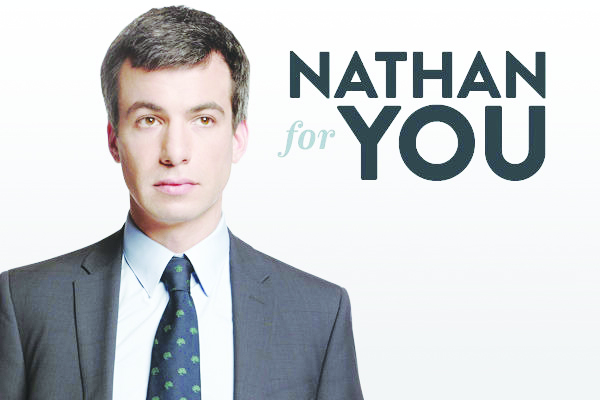 Comedy Central has put together some decent shows. Tosh.0, Drunk History and South Park are among the most creative and stunningly entertaining programs on the channel. But one show reigns supreme. One that can be so brutally awkward, so wildly intricate and laugh-out-loud funny, it amazes me that it is considered a hidden gem as opposed to just a gem.

The show is “Nathan for You.” The premise of this show seems unoriginal at first glance. The host, Nathan Fielder, visits small businesses and implements new policies to generate more business. In some episodes Fielder even creates his own businesses.

Nothing new, right? Shows like “Bar Rescue” have been doing this since the dawn of time. Not so. Remember, this is a Comedy Central show. Fielder visits these businesses with ideas so radical, you won’t be thinking, “Why didn’t I think of that?” you will be thinking, “Who the hell thought of this?”

In one episode, Nathan visits a struggling petting zoo. Instead of holding events or improving operations, he stages a video of a pig rescuing a goat that is stuck in a pond. The video is comprised of a man yelling, “Goat in the water!” while divers guide the stunt pig across the pond towards the goat and both animals finding land safely. After posting the clip online, news outlets across the country were reporting on the “heroic” pig. Fielder vaguely threatens to kill one of the people involved in making the video if he reveals the video to be fake.

I am finding it hard to capture the show’s unique humor in writing. A big NFY fan and close friend of mine, Jake Law, said about the show, “It is a mix of awkwardness, confidence and a dash of patronization. Terrific show.”

In a time when shows like “Big Bang Theory” or “Parks and Recreation” are pumped out of Hollywood with awful writing, derivative storylines, and mediocre actors, “Nathan for You” stands to change comedy all together. It’s not silly. There are no laugh tracks. It’s a business show, sort of.