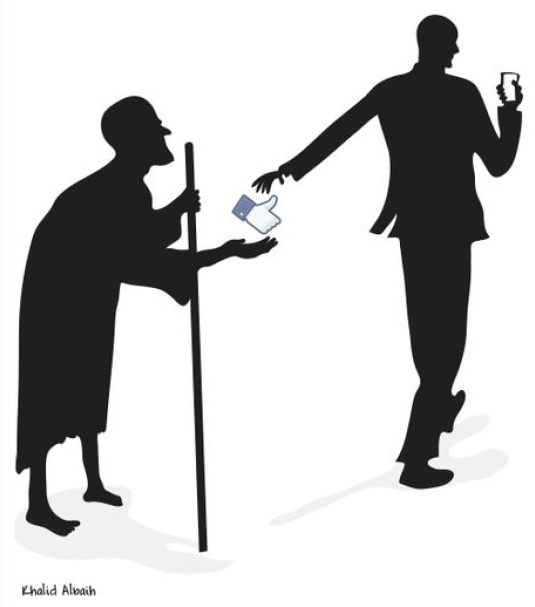 More than a cartoonist, Khalid Albaih is an artist, and his art was displayed at the Arab American National Museum in Greater Detroit.

His illustrated works transcend religious and political ideologies, often focusing on ideals shared by all cultures, and pointing out the ironies and redundancies in modern geopolitics.

When considering Islam and cartoons, the Charlie Hebdo killings come to mind. Recent history has allowed cartoons and Islam to seem as polarizing disciplines, with focus on the negative aspects regarding the depiction of the prophet Muhammed. And yet, there is a side we do not see as often.

Isra El-beshir, a curator for the museum, came to Ferris Tuesday, Feb. 2 to demonstrate Albaih’s work.

“He’s using popular culture and imagery that resonates with you to make a political situation more real,” said El-beshir. “He’s hoping for a dialogue.”

In politically intolerant countries, criticizing government can be a risk. Born in Qatar, but residing primarily in Sudan, Albaih—a Muslim—has taken many risks in condemning national dictators and the intolerance of free speech they share. His works have been used by activists and graffiti artists throughout the world, often feeding feelings of dissent and rebellion, including during the much-publicized Arab Spring.

“It was very educational,” said Elizabeth Alexander, a senior in Ferris’ pre-pharmacy program. “It was interesting to hear about the political cartoons and what they go through to produce.”

With the highest Arab population density, southeast Michigan seemed like a good place to stage his art.

“The other element [of Albaih’s art] is to show that political activism can manifest in many ways,” said El-beshir. “It can manifest through protesting on the street, participating through cartoons, or just using social media as a platform. There are so many mediums to be politically active and represent your communities.”

Khalid Albaih’s cartoon illustrations and other works can be viewed on his website, Khartoon.com, or through his Facebook page, facebook.com/KhalidAlbaih.