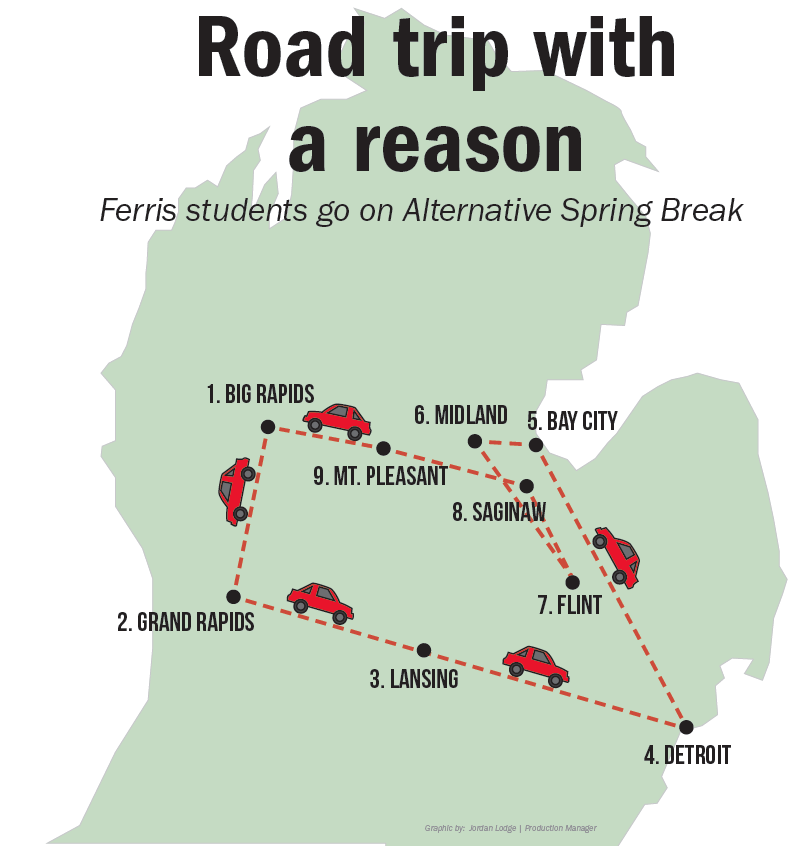 Next week, 18 Ferris students will be spending their spring break how we’d all like to spend it—traveling. However, these students are traveling to further career exploration, give back to Michigan communities and have fun along the way.

Alternative Spring Break is a five-day trip around sites in Michigan, where the 18 students and two advisors will travel as a caravan through cities such as Detroit, Grand Rapids, Lansing and Bay City. They will be given tours, participate in activities and do hands-on service for the communities. The students going on the trip were nominated by their academic advisors, who followed a certain set of criteria to pick them out.

Michele Albright, coordinator of career and volunteer centers in Center for Leadership Activities and Career Services (CLACS), is planning this event, working alongside Matthew Jones, coordinator for Greek Life, who will be focusing on the trip’s impact on the students.

“We decided it would be really cool to do an alternative spring break that brought both career exploration and hands-on service together,” said Albright.

The group will mostly be staying in hotels between stops, except for one night.

“One of the nights we’ll be staying in a homeless shelter in Flint,” said Albright. “We’re going to have a firsthand witness perspective of the people who work to provide care for the homeless. We’ll also be exploring a lot of social justice issues. Our payment to that organization for allowing us to stay in their homeless shelter will be working in their distribution center the next day, helping sort donated items for sale to support their organization.”

“I decided to go because I wanted to get a little bit more background and find more ways to be involved statewide, and not just community-wide here at Ferris,” Rivera said. “We’re going to different businesses and corporations to see how they work on a statewide level.”

“I’m really thankful for the nomination and the opportunity to have an all-expenses-paid trip,” Rivera said.

Keegen Wright, an undecided Ferris freshman, will also be attending the trip.

“I’m still searching [for a major] so this is really going to help me to see what other kinds of jobs there are and see if there’s anything I might want to focus on,” Wright said. “I like going on adventures and exploring, so this sounded really fun.”

Wright said she’s excited about seeing downtown Detroit, going to the zoo in Lansing and going to the Helen DeVos Children’s Hospital.

“We’re going to the children’s hospital in Grand Rapids and I’m excited about that because it’s so amazing,” Wright said. “Kids are usually scared to go to the hospital, but this hospital looks like so much fun. It makes kids want to be there, and I think it’s amazing they put so much care and detail into the design. They make children feel comfortable and not afraid. So, I’m excited to see that.”

Even though these students won’t be going anywhere warm for spring break, they’re nonetheless pumped up for the trip.

“The staff running this program are loving and passionate and it makes me excited to go with them on this adventure,” said Wright.