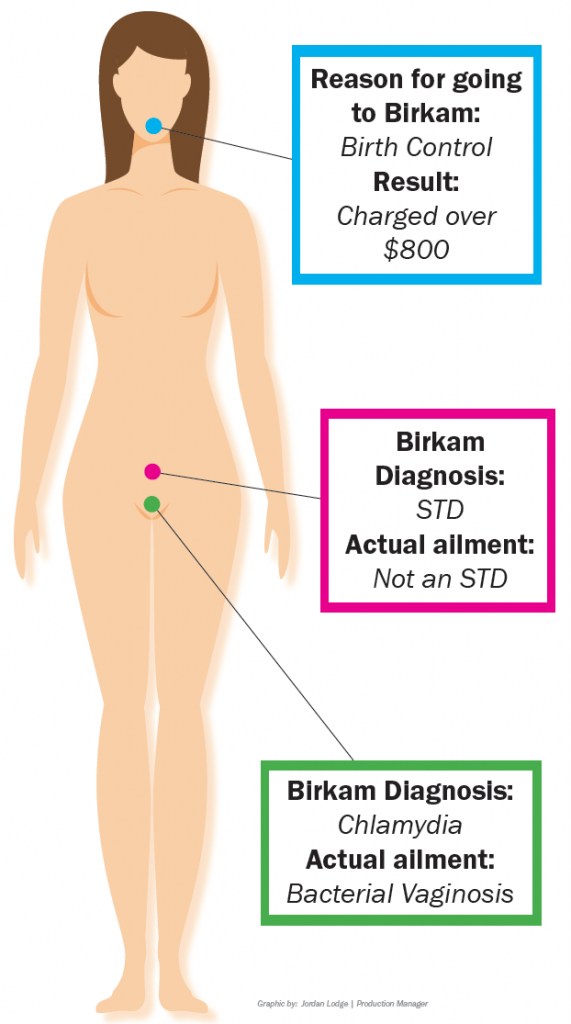 In the mission statement of Birkam Health Center and all over their website, in fact, they claim that their primary goal is to “provide the best patient care and experience.”

The Health Center charges a $47 refundable “health services” fee at the beginning of the year for these services. After speaking to students that have visited Birkam, though, it is called to question: just how quality is the care that students are receiving?

Three Ferris students of varying age came forward and shared stories about their personal experiences at Birkam Health Center. Due to the personal nature of this content, they chose to remain anonymous.

Female Ferris freshman:
I went to Birkam in order to get my yearly check-up and my yearly prescription of birth control refilled. I made sure that the provider understood that I was there for my yearly check-up because I was due for one and that is what my insurance would cover.

However, I got a call from my mom later that week saying she had received a notice from the insurance stating that they wouldn’t cover the appointment because Birkam had not given them enough information to deem the appointment necessary.

Let me be clear, I have very good health insurance; the provider had written virtually nothing in her patient care report. Additionally, we received a bill from Spectrum Health for $400 for the labs Birkam sent there because they failed to also send over my insurance information.

On top of all this, Birkam charged my student account for the cost of the appointment without ever notifying me. That’s not even the end of my complaints, though. When I went to pick up my prescription, the pharmacy told me that I only had a three-month prescription rather than a prescription for the whole year like I had requested and like I had had before.

When I went in to complain and have the prescription fixed, Birkam made me make another appointment to get my yearly prescription. So approximately $1,000 later, I can now avoid getting pregnant. Thanks, Birkam.

Female Ferris senior:
I’ve had multiple bad experiences at Birkam. The worst, though, was when I’m pretty sure I was misdiagnosed with chlamydia.

I started sleeping with a new guy and noticed some weird vaginal symptoms, so I went to Birkam. They ran some tests and told me I had this thing called bacterial vaginosis (BV), which could be cured with antibiotics. They also told me they wanted to STD test me for chlamydia and gonorrhea because the symptoms were similar. They told me it was $35 per test if they didn’t bill my parents’ insurance, so I said okay and got tested. The doctor also prescribed me antibiotics for BV, so I got those and started taking them.

The next day, Birkam called me and told me I needed to come back because one of the tests was positive. I was freaking out. I went back and they told me I had chlamydia. The doctor gave me more antibiotics on the spot that supposedly killed chlamydia. I asked if it was okay to take them while I was on the BV antibiotics and they said yes.

I was sick to my stomach and bed ridden for three days. I couldn’t move without wanting to puke. It was terrible. The BV antibiotics had the worst taste ever and I’m pretty sure they reacted with the other antibiotics because I thought I was dying.

When I thought I had chlamydia, I told everyone I had ever slept with. All of them got tested and not a single person had chlamydia (unless someone lied, but I doubt it). I then did a little research and found out that if you have BV, it often causes chlamydia tests to come back falsely positive.

That’s not even the worst part, though. About a week later, I got a bill for my lab tests from Big Rapids Spectrum Health for $296. They told me it’d be $70.

So my parents found out I had an STD, and I had to pay $200 to be made extremely sick and falsely diagnosed with chlamydia. I bet Birkam is by far the worst college healthcare place in Michigan. It’s fucking terrible.

Female Ferris freshman:
Last October I went to Birkam Health Center for what I thought was a UTI because I’ve gotten them a lot ever since I was little. It was your typical doctor’s visit; she took a urine sample and was going to send it for cultures over the weekend. She gave me antibiotics for the time being and I was supposed to get my lab results back the following Monday through an email to know how to continue.

Monday came around and no lab results came to confirm my condition or make sure it wasn’t anything more serious. I called them and they said I would have to make another appointment and pay for another visit in order to get my results. I refused to make another appointment and asked to speak with the doctor I saw that following week about the matter. They said she retired on Friday.

Then I got transferred to medical records and they told me my lab results were inconclusive. They still charged my student account with lab costs, though, despite the fact that they didn’t go through AND proceeded to tell me that I needed to make an appointment for another urine sample.

At this point I was beyond mad. I was transferred to a nurse to make an appointment. She asked me what my visit was for, I told her the whole situation, and she put me on hold to speak with the new doctor that replaced the one that retired.

When she returned, she informed me that the doctor didn’t want another urine sample, he was sure I had an STD and wanted me to schedule a vaginal exam, not a urine sample. A doctor who had never even seen me and hardly knew what was going on making assumptions like that extremely offended me. I told the nurse to forget about it and hung up the phone.

Over spring break, I didn’t get to go lay on a beach, I got to go see a urologist and get scheduled for further ultrasounds. Also, no STDs. Big surprise there. Thanks a lot, Birkam.