As summer approaches, most students at Ferris prepare to head home, but a select few look forward to exploring a new country.

For many students this is their first trip abroad and it is easy to become overwhelmed with all the preparations needed for traveling to a foreign country.

“I had to renew my passport and I was worried that I wouldn’t get it in time,” said Ferris nursing sophomore CJ Farmer. “I wanted to expedite it through the mail but the ladies at the documents office told me not to. My passport came in two and a half weeks no problem.”

Aside from passports and other forms of documentation, the cost of traveling and attending school in another country is yet another reason to feel overwhelmed.

“Something I had to consider before making my decision to study abroad is the cost. It is expensive, with the fact that I will be giving up part of my summer that I could have been working,” said Rachel Hoekstra, a Ferris first year pharmacy school student. But the stress goes beyond the formalities of the trip.

“I believe a student should be mentally and emotionally prepared for traveling to a foreign country on abroad trips and for extended amounts of time,” said Ferris Spanish for the professions senior Ben Davis. “Cultural shock from entering a new country can really send a student for a rollercoaster ride but it’s how one learns.”

Depending on the study abroad trip, living with a host family that speaks another language can also be something to consider on the seemingly never-ending list of challenges.

“Speaking confidently and conveying new ideas will prove to be a new challenge that will hopefully be the largest area of growth while on the trip,” said Ferris biology and pre-med sophomore Erin Duma. “It’s always a nerve-wracking mindset to do something that stems from so much preparation such as traveling to a different country.”

Yet none of these concerns are stopping these students from going.

“I made the decision because it is a great opportunity and I may never have a chance to do this again,” said Hoekstra. As Davis advised, “Just taking 10 minutes to reflect on what you might feel or how you perceive things and prepare yourself for these events will help immensely.”

The list of preparations varies for each trip abroad, but it’s not stopping a number of students from taking advantage of the wonderful opportunities that await them.

“The most worldly education one can ever receive does not necessarily reflect the amount of degrees granted, but the accumulation of thought and experiences who really make someone question who they are, where they come from, why they are the way they are, all in the attempt of trying to understand the complexities in the world and human condition— the only path to doing so, in my mind, is to travel internationally by going out into the world willingly and open-mindedly,” said Ferris Spanish Professor Eric Warner. 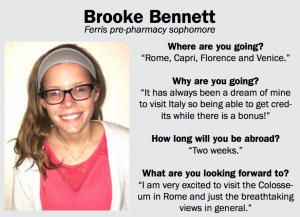 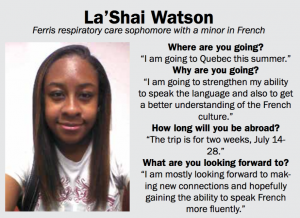