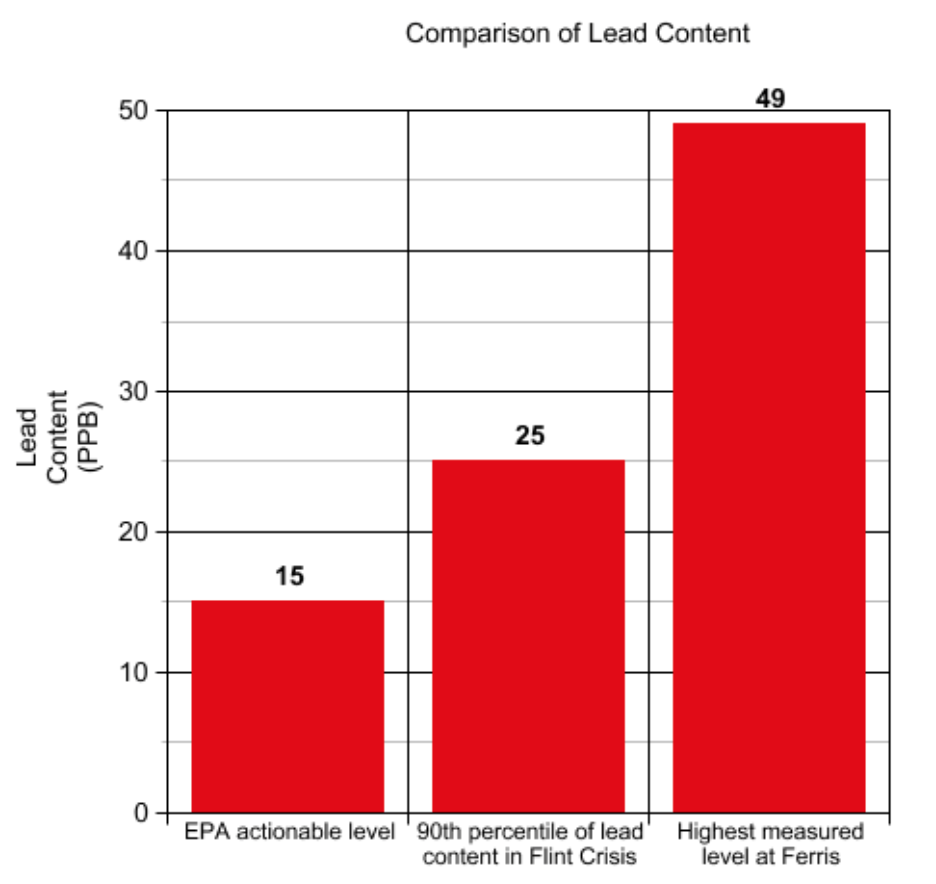 Ferris State University recently conducted tests for heavy metals, such as lead and copper, in its water system. The results of these tests were made available to its students on the Big Rapids campus in late May of 2016.

This past year, the quality of drinking water provided to the people of Michigan, and across the United States in general, has become a topic of much discussion.

According to the Environmental Protection Agency (EPA), the highest recommended lead content for drinking water is 15 parts per billion (PPB). Of the 123 Ferris State sources of water recently tested, including taps and fountains on campus, seven returned levels above the 15 PPB level with only one more than tripling that amount.

According to the press release from Ferris State, the recovered measurements and locations were as follows:

Additionally, there was a unit in Tot’s Place on campus that showed copper levels of 1,700 PPB, above the EPA’s actionable level of 1,300 PPB. After receiving the results, all the contaminated outlets were immediately removed and replaced.

An employee working for the EPA’s Safe Drinking Water Hotline thinks that there is definitely a reason for concern, however.

These effects include both cardiovascular and kidney problems. In addition, because of the average age of students living in residence halls, there is also the added concern of an impact on brain development.

According to Mark Sheehan, a Communications Officer with the President’s Office at Ferris, there has not been regular testing for contaminants in the water on campus, as it is not required by the state for individual universities to do so, rather it falls on the municipality.

The City of Big Rapids Water Quality Report for April of 2016, however, tested negative to all potential contaminants.

“This is a place of education, where the results of human exposure to lead is well understood,” said Ferris graphic design sophomore Keegen Wright. “It’s disturbing to think that an educational institution such as Ferris, would disregard such a health threatening issue. I strongly believe that all universities and colleges should be required to test their water.”

According to Sheehan, it was actually the recent media coverage regarding water contamination that spurred the testing.

“Since this has been in the news recently and people have had their consciousness raised, we began testing this year,” said Sheehan. “Since doing that we found isolated fountains and faucets with elevated levels.”

Isolated in this instance means that while certain fountains and faucets have tested high in lead content, because of the sporadic nature of the results it is not believed to be an issue with infrastructure or the larger piping systems.

“The problem with drinking fountains is that the older ones use, if not lead, copper piping,” said Sheehan, “And up until the 1970’s, the industry standard was to use lead solder, so if something becomes cracked or worn contamination can stem from that soldering.”

The approach in choosing which particular water sources to test has been systematic in targeting both older buildings and residential facilities on campus. While the university collected the samples, the actual testing was outsourced to an independent facility.

Despite some of the results being over three times the EPAs actionable level, Sheehan said that the university will not be advising students living on campus to not drink from the tap as the contaminated sources are being replaced.

“While we have had some abnormal results, they have not been close to some problems that other municipalities have had with this,” Sheehan said. “What I want to stress is that those problems are being fixed by individual replacements of fixtures and faucets.”

Ferris pre-optometry sophomore Desiree Miller was upset by the results of the tests.

“I don’t appreciate being potentially exposed to unsafe drinking water by university housing,” said Miller. “We pay a lot of money to live in the [residence halls] and should be guaranteed safe drinking water.”

Sheehan said that due to the difficulty and expense that would come with testing every individual faucet and fountain on campus, the university will not be undertaking that project at this time. They will be continuing systematic tests of older fountains and faucets.

“We feel that with the testing that we’ve done and with testing going forward, we’re feeling very confident that the water supply on campus is very safe,” said Sheehan.

Some students feel that this method simply isn’t good enough.

“The fact that the university refuses to test all of the water because of difficulty and expense, gives me the impression that they care more about convenience, and their financial welfare than the health of the students residing here,” said Wright.

Information on lead contamination can be found on the EPA’s website at https://www.epa.gov/lead. The university has also provided the following phone number for those with questions regarding the testing program and results: 1-800-378-1964.