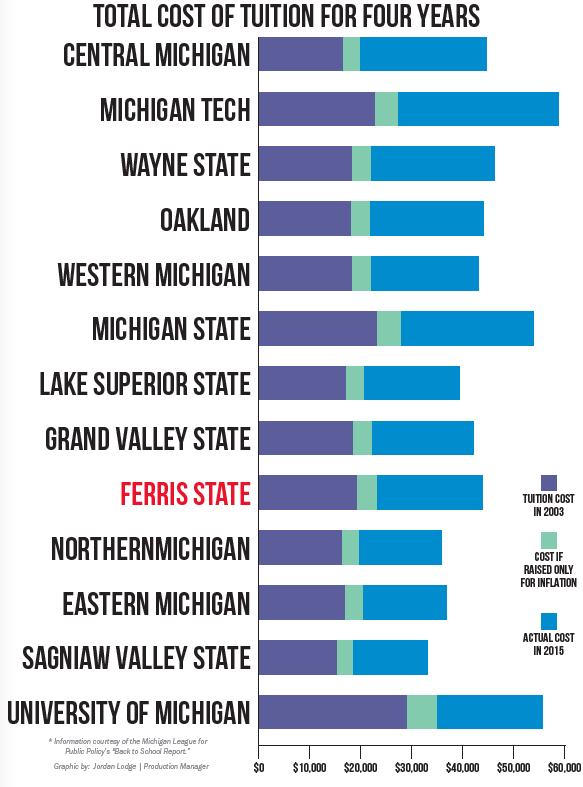 Student debt is the Grim Reaper for every college student, especially when that amount should be half of what it is.

“It’s kind of ridiculous. We shouldn’t be paying as much as we are,” said Ferris undecided freshman Alessandra Impellizzeri. “It inhibits other people from going to school and colleges and pursuing careers. It’s kind of sad to hear because no one can pursue their dreams and it diminishes our economy more than helps it.”

Another report by the MLPP states that 62 percent of Michigan college students graduate with debt, which averages in $29,450. This is due to the state of Michigan cutting university funding by $262 million, the report explains.

“It kind of surprised me, but also I’ve noticed that tuition has gone up,” said Ferris graphic media management senior Megan Hunt. “I’ve saved up money, which helps, but it’s definitely hard.”

Michigan also spends less need-based financial aid per student than most Midwestern states according to the MLPP. The U.S. average was roughly $533 per undergrad in the 2013-14 school year but Michigan only spent an estimated $223 per undergrad.

“Luckily, I don’t have to pay tuition. Both my parents do work here at Ferris, so I do have their tuition waivers,” Impellizzeri said. “But, because of tuition in general, for other colleges, it prohibited me from actually going to the college of my choice.”

The MLPP said that pell grants no longer cover a large enough portion of the rising tuitions to maintain affordable college for low-income students.

In fact, many blame the accessibility of high-interest private loans for the rapid increase in debt. The schools know that students have access to more money through lenders, so they charge them more.

“Just keep looking for scholarships,” Ferris pre-dentistry freshman Brianne Harvey said. “If you can, I would work and get more experience in life so it’s easier to get a job.” Even though me working at Wendy’s isn’t going to get me a job in a dental office, but still it’s experience working with people.”

Michigan students will have to keep searching for scholarships as tuition at four year universities in Michigan is ranked 6th highest in the nation and second highest in the Midwest.

More information can be found in the MLPP’s “Back to School Report.”