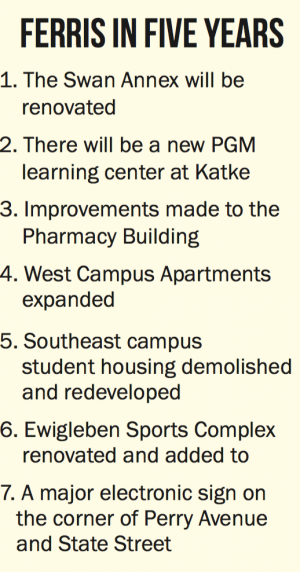 Construction on campus not only comes as a surprise to students, but it can also feel endless at the same time.

According to Jerry Scoby, Ferris vice president of administration and finance, construction is moving along as scheduled and proposed in the Master Plan published in 2015.

“The Swan Annex project is underway and is scheduled to be completed by the summer of 2018,” Scoby said. “The early part of the project includes site work on the south side of the existing Annex, adding a new loading dock for the National Elastomer Center so there is dock access after the Swan Annex addition is added to the South of the existing Annex. The bridge to Ives has been removed, and work has started on the new pedestrian bridge that will connect the second floor of the Swan five story building to the parking lot north of the building.”

Scoby also explained that, back in December, the Board of Trustees authorized the administration to retain professional services for the planning of the demolition project of Merrill and Travis halls. However, it is still in the planning phase.

“Preliminary planning has been done for an addition to and partial renovation of the Sports Complex. The exciting Center for Athletic Performance project for our student athletes is in the fundraising phase where we are seeking donor support to fund part of this project,” Scoby said. “The addition would be primarily focused on adding an NCAA Division II collegiate-level strength and conditioning space.”

Pre-construction planning has also been approved for renovations to parts of the Student Recreation Center, according to Scoby. The project is categorized as long-term in the Master Plan, however improvements to the center will be made within the next two years.

As for the ongoing construction of the new north residence hall, which is not specifically listed in the Master Plan, it is set to open this summer.

“This 402-bed facility will open in Aug. 2017 and will be for first-year students,” Scoby said. “It will also have three classrooms for living/learning programming, numerous small group study rooms, a fitness area for residents and a community kitchen near the main first floor lobby.”

Students on campus are most concerned with how construction is and will be, effecting parking on campus.

“Honestly, they’ve already taken a lot of our parking spots,” said Ferris public relations sophomore Kayla Barwick. “I’m going to be a commuter next year, so I’ll be a little upset if I’m going to start losing more and more parking spaces next to my classes.”

Despite parking troubles, Scoby assures that the location of new housing for students was selected directly from student input.

“We think students will love the opportunities in the [north] hall and the close proximity to Arts and Sciences, the University Center, FLITE and more,” Scoby said.

Students and community members who are interested in learning more about current and upcoming campus construction can find the entire master plan at www.ferris.edu/strategic-planning2/2015-master-plan-final.pdf.