It’s 11 a.m. and you have an hour before your lab starts. You walk to the UC in hopes of grabbing a quick bite, only to be met with a line down the stairs and not an empty seat in sight.

With recent additions to Ferris’ on-campus dining services, the above scenario will become a thing of the past.

“As you know, we have a new residence hall on north campus and to be prepared for that, we took a long hard look at our options that are available to students, particularly at lunch time, when many students from south campus visit north campus because of it being the academic court,” Director of Dining Services Lori Helmer said.

“To alleviate some potential overcrowding issues at the Quad Café, we came up with some options for students and I think they’re going to be really excited about it.”

The first and biggest change is the introduction of the Meal X Change program. This allows any students that have swipes, meaning both those holding the anytime and express plans, to use one of those swipes on four different types of grab-and-go meals: pizza, salads, sandwiches and breakfast sandwiches.

The X Change program will be available at both the Market on south campus and the new Snack Shack, located where the Bulldog Pizzeria used to be, next to the Quad Café.

Hours for the Snack Shack are 10 a.m. to 10 p.m. Monday through Friday, and the hours for the Market are noon. to 1 a.m. seven days a week. Both accept swipes, Bulldog Bucks, credit, debit and cash.

“We want to respond to the demand of the business,” Helmer said. “So we are going to look at, for example, if we have a demand to be open at 9 a.m. instead of 10 a.m. at the Snack Shack, we’ll consider that. This is really just a starting point. We think we’re going to get an excellent response.”

Furthermore, students will also have the option to use the green takeout containers at no additional cost, which will also help alleviate the seating issues in the Quad.

“Every student who lives on campus this fall will get a free takeout container in their room when they move in,” Helmer said.

Other changes include the addition of Freshen’s offerings to the all-you-can-eat side of the Quad Café, which freed up an additional 60-plus seats.

“Last year in the fall, we were feeding over 1700 in the Quad Café for lunch,” said the Director of the Quad Café Craig Bowman. “We have 360-380 seats in there, but there were kids that were standing along the wall eating… some even chose to sit on the floor and we don’t want that, obviously. So that is why we came up with another plan so that these customers have another option, because sometimes they need to eat when they need to eat, and they’re on a time frame where they can’t just come back later.”

Lastly, there will be a shuttle running back and forth between the Rock Café and the Quad Café every five minutes during peak times, 11 a.m. to 2 p.m., Monday through Thursday.

“If students think it might be too busy at the Quad Café, they can hop on the bus and go over to the Rock Café, and every five minutes it will be going between the two,” Helmer said. “That will start the first day of classes.”

In conjunction with this, the Rock Café will be offering new Hispanic menu options from 11 a.m. to 1 p.m. every day.

“That’s something that the students have been asking for,” Helmer said. “It’s extremely popular at the Quad Café.” On the other side of campus at Katke Golf Course, the recently acquired Founder’s Grill is also preparing for the upcoming school year.

“It’s a very nice atmosphere there and it’s a gorgeous view from Founder’s Grill,” Helmer said. “We have a nice dining area inside and we have really great servers there, but we also have outdoor seating. You can’t find a nicer view in Big Rapids than from the patio at Katke.”

The establishment will be open for the remainder of the golf season, at which point dining services will take the opportunity to assess any change that might need to be made.

The eatery is particularly convenient for golfers, working in conjunction with the Tapingo services.

“Students, or anybody, can place their order while they’re out on the golf course and have their meal be ready when they’re making the turn or finishing up,” Helmer said.

Helmer wanted to remind students that both Bulldog Bucks and express meal swipes roll over from semester to semester and year to year, as long as the student remains enrolled at Ferris.

“We are very excited to be able to offer these options to the students,” Helmer said. 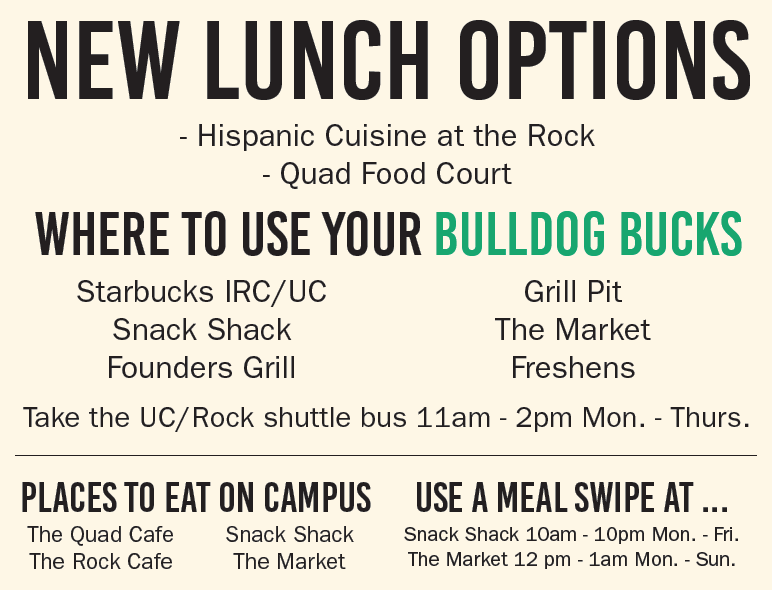