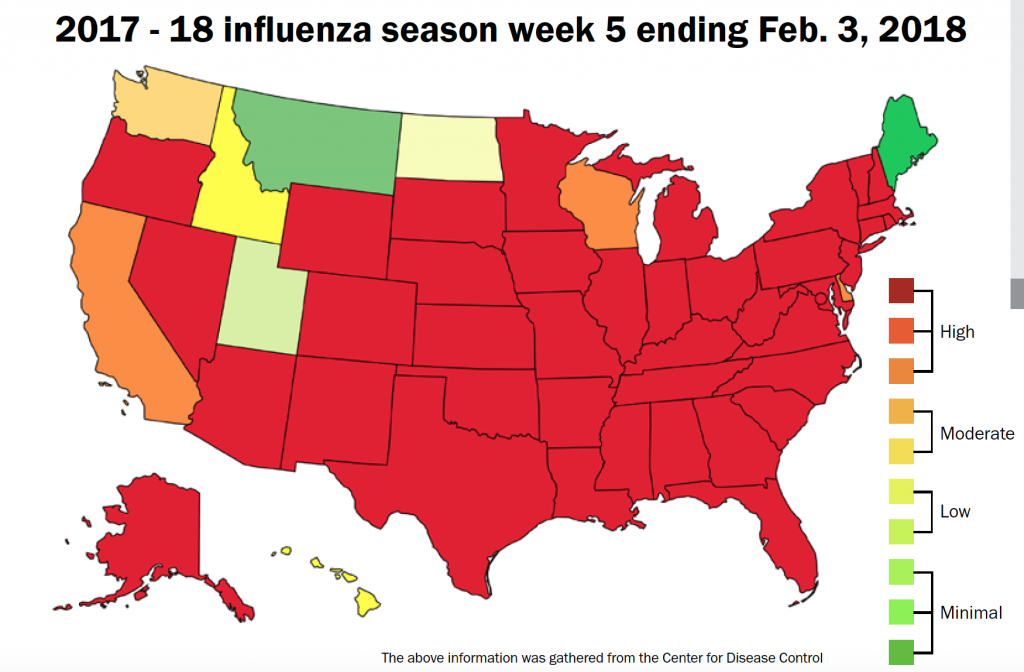 The close quarters of life on college campuses can create unavoidable contact with people who are sick and can quickly spread illness.

According to data from the Centers for Disease Control and Prevention (CDC) this year’s flu season is on pace to be the worst in at least eight years. The data, which only goes back to 2010, shows that as of January, 2018 has the highest amount of laboratory confirmed influenza hospitalizations out of the last eight years.

At Ferris, Birkam Health Center has diagnosed 38 patients with influenza during the fall and winter, according to director of health services Lindsay Barber. During the same amount of time last year, Birkam only had one influenza diagnosis.

Some Ferris students are seeing the impact of the flu outbreak in their classes. Pre-veterinarian and biology sophomore Ciara Kibby said that she knows at least ten people who have gotten the flu, including two of her professors.

“I’ve had two professors cancel class because they personally were sick and talk about how low the attendance was. It was really scattered, a lot of tables were half empty or almost completely empty,” Kibby said. “I think it’s better to stay home if your sick but I would go to class because I feel like I have to.”

“The first thing I do is always get a flu shot because it’s proven to be the best way to avoid it. If I am unfortunate and get it, then I rest and if I’m really feeling bad, I’ll go in to see about being placed on antibiotics,” Ferris pre-medicine sophomore Jordan Van Wert said.

If you can’t avoid the flu and find yourself sick, there are several steps you can take to aid your recovery.

“The flu is a virus. The best treatment for the majority of our students—young, healthy, no other medical conditions—is rest and fluids. It is advised that if you think you have the flu or an illness similar to the flu, you should stay home, rest, keep warm and drink fluids,” Barber said. “There is no cure for the flu. You are able to treat your symptoms with the appropriate over-the-counter medication advised by your doctor. It is advised that you wait until you are fever free without a fever-reducing medication such as Tylenol for 24 hours before you return to work or school.”