This week’s fantasy football did not fall in favor of the Bulldogs. Despite two monster performances from Ferris junior quarterback Jayru Campbell and Ferris junior receiver Dion Earls, the pros were able to edge out Ferris by a wide margin.

Because this is just a test-run before we move into the NFL regular season next week, I will not be diving into the numbers too much. Instead, here are a few things to note: Campbell is looking Reggie Bell-esque with his 34-point performance. Having a quarterback that can throw for over 200 yards and rush for another 100 is a big help for the Bulldogs’ fantasy team.

You can expect to see Ferris junior quarterback Travis Russell in the FLEX position quite a bit this season. Russell has too much talent to ride the bench behind Campbell, so expect head coach Tony Annese to toss him in on designed plays.

This week’s large numbers for the pros are very misleading. While you can expect them to put up good numbers, this week was a preseason game and most teams were resting their starters, which allows for larger plays.

Ferris sophomore receiver Wyatt Plate is listed as tight end for the Dawgs. Since Ferris did not use a tight end against East Stroudsburg, I will continue to substitute a receiver at that spot if there are no contributing tight ends for Ferris.

Say it with me now: I-N-J-U-RI-E-S. The Bulldogs were missing a few notable names on the field this week, which likely lead to the drop-off in numbers. One big name on that list is Ferris senior receiver Malik Taylor. Expect the numbers to take a leap when the 6-foot-3 deep-threat returns.

With the start of the NFL’s regular season set to begin Thursday, Sept. 6, we will soon see if the Bulldogs will continue their trend of wiping the floor with any fantasy lineup we place in front of them. 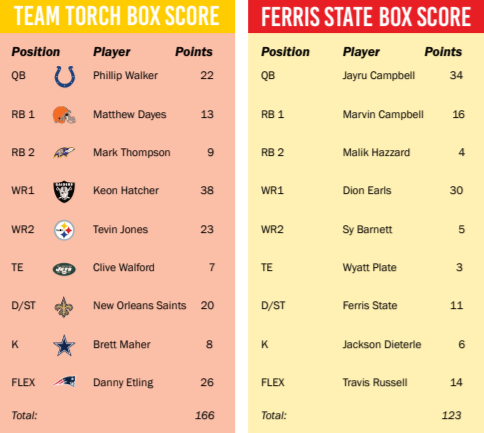