Sitting at 4-0, Ferris football has had quite a successful offense, but there is one unit waiting for their spotlight.

“Win every quarter” is the motto for the football team this year, and they are having no problem doing so. Averaging 584 yards
per game on offense, it is easy to look at the stat sheet and see how incredible of a game a running back, wide receiver or a quarterback had.

What is left out of discussion however, is that these skill players would not be putting up such large numbers without the help of a dominant offensive line. There are no personal stats recorded for ‘blocks per game,’ so the common fan may turn a blind eye. However, the work Ferris’ offensive line does should not go unnoticed.

“I would say the offensive line is the most slept,” Ferris junior quarterback Jayru Campbell said. “If my stats look good, they might give me offensive player of the week or something like that, but without those linemen in front of me, I know that none of that is possible.”

The offensive line has helped Campbell post impressive stats week in and week out with their great blocking up front. The offensive line had an outstanding performance yet again Saturday, Sept. 22, beating Northern Michigan 35-19. It is crucial for the O-Line to hold their blocks and be consistent throughout the season, whether that be in the run game or passing game. Thanks to the alternating roster of five guys in front of him, Campbell has only been sacked twice this season.

“It just makes me feel real comfortable and happy to be able to play for a football team with an offensive line like this,” Campbell said.

Protecting a talented quarterback like Campbell is a big task for even the best offensive line, but the big men for Ferris are up to the challenge. They know that the fewer times he gets hit, the less wear and tear he receives on his body, which is key to staying healthy for the season.

“He’s like a mother to a family,” Ferris senior right guard Nic Sawyer said. “We take care of him, he looks after us … we just do
the best we can to protect him and we know he has our back, so we got his.”

No matter which five guys line-up in front of the quarterback for the Bulldogs, there needs to be a sense of chemistry to ensure that everyone picks up their assignments.

“We kind of spent all summer together. We did a lot of group initiative type of things at Eagle Village,” Ferris senior left tackle Devon Johnson said.

Campbell has seen the benefits of his O-Line working on their chemistry firsthand.

“The unity within those five guys is very special … You can tell how they get along with one another, how they’re not scared to push one another, tell one another to pick up the slack if one is tired,” Campbell said.

Other than physical strength, the mentality the offensive line must have is just as important.

“We have the mentality that we’re the best on the field and that no one can stop us,” Johnson said.

Next up for the Bulldogs is a battle for first place in the GLIAC against the Ashland Eagles at the Bulldog homecoming game 3 p.m. Saturday, Sept. 29 at Top Taggart Field. The game will also be broadcast on ESPN3. 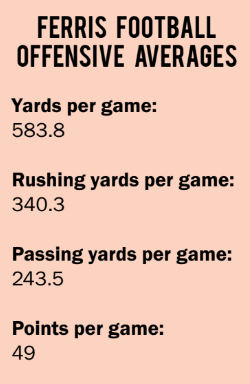